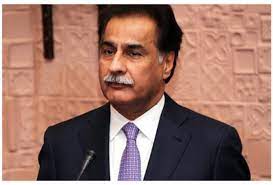 LAHORE: Federal Minister for Economic Affairs Sardar Ayaz Sadiq said on Sunday that in January 2023, Pakistan Muslim League (N) will form its government in Punjab, while Muhammad Nawaz Sharif would soon return to Pakistan and N-League would also win with a huge majority in the upcoming general elections.

He expressed these views while addressing a public meeting in his constituency Union Council 147 Tajpura on Sunday and later talking to the media persons.

Sardar Ayaz Sadiq said that when the electricity problem was very serious in Tajpura, our party was in opposition, but we solved the problem here immediately and more than hundred transformers were installed in this area. He said that our effort has been to spend the development funds keeping in mind the basic needs of the people. He said, “Today is Christmas, and the birthday of founder of Pakistan Quaid-i-Azam Muhammad Ali Jinnah as well as of our leader Nawaz Sharif, which is very important for us. We need to follow the orders of the founder of Pakistan, Quaid-i-Azam Muhammad Ali Jinnah. I offer my heartfelt greetings to the Christian community on the occasion of Christmas and hope that the minority community will actively participate in the development of the country.

Ayaz Sadiq said that if Quaid-e-Azam Muhammad Ali Jinnah had not been born Pakistan would not have been formed. “Today we are living in a free and independent country due to the selfless leadership of the founder of Pakistan Quaid-l-Azam Muhammad Ali Jinnah and the sacrifices made by our elders for the establishment of Pakistan.” He said that at present Modi government in India had made it impossible for the minorities to live especially Muslims were being subjected to the worst atrocities.

Muhammad Nawaz Sharif would return home soon to pull the country out of prevailing crises, he said and asserted, “Our leaders are carrying forward the traditions of the founder of Pakistan and they know how to respect others while Imran Khan has always done negative politics and called his opponents by bad names.”

He said that Muhammad Nawaz Sharif led the country on the path to development in every period of his government and made Pakistan invincible by making it a nuclear power, even though at that time then US president had offered five billion dollars to Pakistan but Nawaz Sharif did not accept it and preferred to make the country a nuclear power. He said that when PML-N had completed its tenure in 2018, the GDP growth was around 6 percent, after that when Imran Khan was came in power, he led the country towards ruin. “Similarly, when we left power, Pakistan had a debt of 30 billion dollars, which increased to 60 billion dollars during the 44 months of Imran Khan’s government.”

Federal Minister mentioned that then PML-N government had left the power circular debt of Rs 1100 billion, but the PTI government had increased this dept manifolds, and Imran Khan made such an agreement with the IMF, which created more economic crisis in the country. At the time when the prices of various goods had to be increased then PTI did not increase these because they had realized that they would soon be kicked out of the government and the incoming government would have to bear the brunt of it and now the entire nation was suffering along with the incoming government.

He said that Imran Khan was a man who forgets kindness, whoever did him a favor had not remained safe from his evil. The Muslim League (N) had given funds to Shaukat Khanum along with land and Jahangir Khan Tareen played an important role in forming her Punjab government. Aleem Khan made countless sacrifices for the PTI, while the former army chief also has a lot of favors on Imran Khan, but these favors were being forgotten and he was saying bad things to everyone. “I will say this to Chaudhry Pervaiz Elahi that Imran Khan is no one’s friend,” he added.

Sardar Ayaz Sadiq said that at the time when there were floods in the country, Prime Minister Muhammad Shahbaz Sharif was busy helping the flood victims while Imran Khan was busy in his rallies without caring about the flood victims. He said that in the next general election, Muslim League (N) would win with a huge majority and Imran Khan would not be seen for a long time.

Answering the media questions on this occasion, Ayaz Sadiq said, “We hope that Muslim League (N) will form its government in Punjab in January and we will hold municipal elections in April.”

Speaking on the occasion, Muslim League (N) leader and former provincial minister Khawaja Salman Rafique said that PML-N always took Pakistan on the path to development and exemplary works were done during its tenure in governments. Developmental schemes for their constituencies were stopped by present government, but next month when PML-N government would be formed in Punjab too, they would complete these schemes on priority basis.

He said that during the regime of Imran Khan, political opponents were treated very inappropriately and fake cases were registered against them.