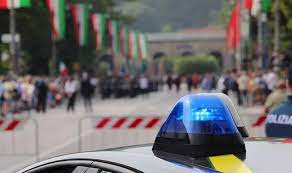 BUDAPEST (AP): A police officer has died in Hungary’s capital after being stabbed by an assailant along with two other officers while responding to a call, Hungarian police said Friday.

Police received a call late Thursday that a man had broken down the door of a neighboring apartment in Budapest’s 11th district and was attempting to enter. Responding officers attempted to take the man into custody when he attacked them, stabbing three officers and running into the street.

One officer fired a warning shot and then shot the fleeing man in the leg, the city’s police department said. The man was then taken into custody and transported to the hospital along with the wounded officers.

One of the officers, a 29-year-old sergeant major with Budapest’s 11th district police, died of his injuries in the hospital, according to a police statement.