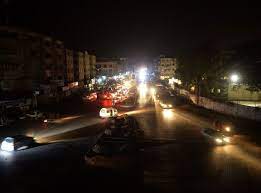 A massive electricity breakdown hit the country Monday morning disrupting life in all major cities including Islamabad, Karachi, Lahore, Peshawar, and Quetta. According to reports, the transmission lines of the Tarbela and Mangla dams were tripped and all power plants in Guddu, Jamshoro, Muzaffargarh, Haveli Bahadur Shah, and Balloki shut down at the same time. The authorities claimed that the NPC fuse was switched off to save the system, however, the power supply went off while IESCO, LESCO, MEPCO, SEPCO, QESCO, and K-Electric were the most affected.

A sudden and prolonged power breakdown occurred across the nation that not only plunged the entire country into darkness and abrupt halt but also clearly exposed the reliability and untrustworthiness of the national institutions. Awfully, such incidents are a recurrent phenomenon in the country while the high-ups of the WAPDA, the NTDC, GINCOs and DISCOs are used to every day negligence of their institutions, however such nationwide mishaps brought their internal malfunction to the nation.

Realistically, technical faults and line tripping is not unusual and can happen anytime but mostly such problems damage a specific system/ region becuase of circuit breakers/ fuses and other protective gears but no safety arrangements were in placed or worked and a countrywide power shutdown collapsed the entire nation even communication system and air operation chowked for hours due to electric failure . Unfortuantely, there was no alternative arrangement with WAPDA, NTDC or NPC to provide energy to highly sensitive aviation sector, Federal capital and other defense/emergency services during this period.

Ironically, after occuance of a huge blunder, the resorted to the several times used strategies and abhorent tactics, the power division baselessly claimed that an irreparable loss averted by safety measures and timely response of the authorities. In fact, people are used to and utterly annoyed with such policies of its rulers, which never worked in the past. Currently, the public demands a stern accountability and strictest measures to stop such shameful reocurrences and national losses in the future.