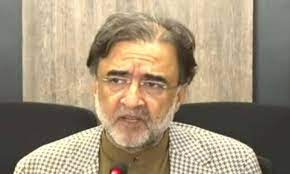 ISLAMABAD: Prime Minister’s Adviser on Azad Kashmir and Gilgit-Baltistan Qamar Zaman Kaira on Monday took a jibe at Pakistan Tehreek-i-Insaf (PTI) supremo Imran Khan and said he was spreading chaos in the country through baseless statements.

Addressing a presser, the PPP leader, while criticising the previous government, said the PTI government put a dent in the country’s foreign policy by neglecting friendly countries, adding that Foreign Minister Bilawal Bhutto was putting in efforts to fix the damage done by Imran Khan.

Talking about surging terror attacks, he expressed concern and said that “as a nation, we believe in our armed forces, and they will again thrash terrorists and their handlers.”

Earlier, speaking at a cultural show organised by the Ministry of Information and Broadcasting in the honour of the Somali ministerial delegation led by Interior Minister of Somalia Ahmed Moalim Figi at the Pakistan National Council of the Arts, he said, “The struggle of Pakistan for democracy and its broad-based constitution is the best model for Somalia to learn the state-building experiences.”

He said the educational institutes of Pakistan were imparting the technical and professional knowledge to the youth of Somalia, which was a matter of pride for Pakistan. Mr Kaira said Pakistan and Somalia had strong cultural relations which needed to be strengthened more.

“There is a huge potential of cooperation between both the countries which is needed to explore further,” he maintained. He urged experts on both sides to play their role to chalk out possibilities of mutual cooperation to enhance bilateral relations.

The adviser extended his gratitude to the UNDP for making the ministerial study tour of Somalian delegation to Pakistan.

Lauding the cultural performances of the artist at the show, Interior Minister of Somalia Ahmed Moalim Figi extended his gratitude for the ministry of information for organizing a colorful event where the delegation had some time to enjoy the artistic presentation of Pakistani culture.

“We had a very productive and busy week in Pakistan which encapsulated diplomatic, constitutional and political discussions and we have learned a lot from Pakistan,” he added.