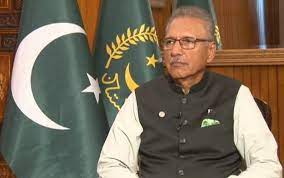 ISLAMABAD: President Dr Arif Alvi on Monday phoned the bereaved families of Shaheed personnel of Pakistan army who embraced shahadat in different incidents. The president, during his conversation, said that sacrifices of Shuhada to eliminate terrorism from the motherland would be remembered forever.

He paid tribute to Shuhada, expressed sympathies with the bereaved families and prayed for them to bear the losses with fortitude. The president contacted father of Shaheed Sepoy Muhammad Wasim who embraced martyrdom in Janikhel area of Bannu on December 31, President Secretariat Press Wing said in a press release. His father expressed the resolve that he had three sons who were ready to sacrifice themselves for the motherland.

The president lauded the sacrifice of Shaheed sepoy and the patriotism of his father. The president also contacted Muhammad Ashraf, brother of Shaheed Sobedar Shujja Hussain, who laid down his life in Kurram district on December 29.