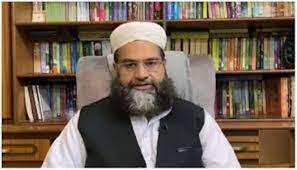 ISLAMABAD: Prime Minister’s Special Representative for Interfaith Harmony and Middle East Hafiz Muhammad Tahir Mehmood Ashrafi on Monday said the statement of Minister for Religious Affairs and Interfaith Harmony Mufti Abdul Shakoor on minorities fund was being twisted for point-scoring by a segment of the society which was totally unfair.

He, in an exclusive talk with APP, endorsed the statement of Mufti Abdul Shakoor and said there was a fund established in the ministry by the previous governments to help the minority communities particularly at the time of their religious festivals.

“There is no bar at helping the minority communities as they are bona fide citizens of the state and their rights are equally enshrined in the Constitution,” said Ashrafi who is also the chairman of Pakistan Ulema Council. He said the Constitution was made by great religious leaders and scholars including Shah Ahmed Noorani, Maulana Mufti Mehmood, Maulana Ghulam Ghous Hazarvi, Maulana Abdul Haq and Professor Ghafoor Ahmed and so on.

He said as per law and the Constitution, the minority communities must be given their due rights and that was why; they were getting so under the visionary and dynamic leadership of incumbent government.

Ashrafi said the question should be to provide funds to the Ministry of Religious Affairs and Interfaith Harmony for the construction and other affairs of mosques adding that the ministry also organized the International Seerat-un-Nabi Conference on 11th and 12th Rabi-ul-Awwal and bore its huge expenses annually. On the controversy of wishing the birthday of Prophet Hazrat Isa Alahai Salam, he made it clear that Hazrat Isa Alaihai Salam was also our prophet and his prestige and dignity was equally significant as rest of the ‘Messengers of God’ as per Islamic faith. (APP)