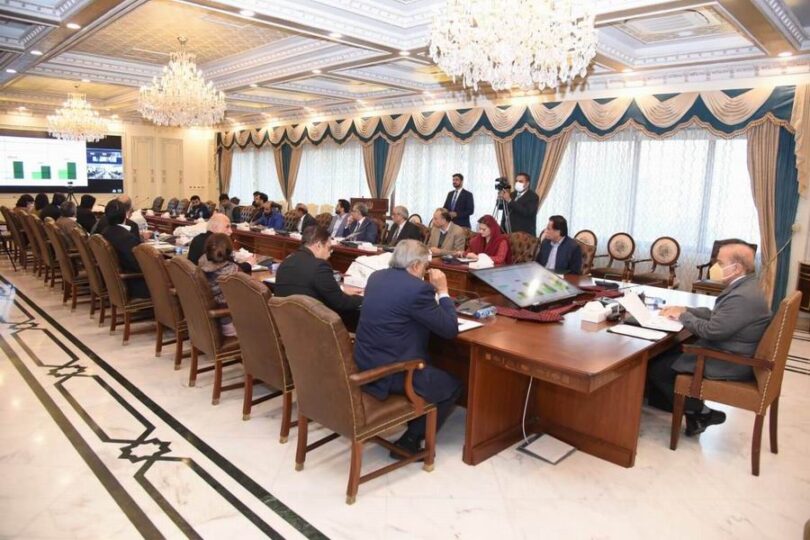 ISLAMABAD (APP): Prime Minister Shehbaz Sharif on Monday directed the officials concerned to reduce the circular debt in the energy sector.
The prime minister was chairing a high-level meeting here regarding the energy sector. During the meeting, the participants considered the adoption of a comprehensive strategy to control the present circular debt in the oil and gas sectors.
PM Shehbaz said the Pakistan Muslim League-Nawaz government completely eradicated the circular debt during its tenure of 2013-2018.
He resolved to bring the problem of debt under control with continuous efforts and effective planning.
He directed that reforms in the energy sector should be undertaken in a way that the circular debt could be eliminated.
The distribution companies of natural gas should improve the system of recovery of bills, he ordered, adding no additional burden should be put on the gas and electricity consumers. He said the system for payment of bills of gas and electricity should also be made effective.
The meeting also reviewed the energy-saving plan, which would be presented before the Federal Cabinet on Tuesday.
Chief Ministers of provinces were also invited to the cabinet meeting.
The prime minister instructed that all possible steps should be taken for ensuring an increase in revenue from the energy sector. He said the energy transmission system should be improved and the losses and theft of electricity and gas should be stopped.

LAHORE (INP): The Pakistan Muslim League-Nawaz (PML-N) has devised a plan to block imminent dissolution of the Punjab Assembly on Friday December 23.
Prime Minister Shehbaz Sharif chaired a party meeting at his Model Town residence. PML-N leaders including Khwaja Saad Rafique, Ayaz Sadiq, Ataullah Tarar and Malik Ahmed Khan attended the meeting wherein consultation regarding the dissolution of assemblies was held.
The PML-N huddle decided that Punjab Chief Minister Chaudhry Parvez Elahi would be asked to obtain a vote of confidence in the Punjab Assembly. Furthermore, the party lawmakers have been asked to stay in Lahore this week.
If CM Elahi fails to secure the vote of confidence, he would lose the power to dissolve the assembly. A day earlier, Prime Minister Shehbaz Sharif held a meeting with PML-Q chief Chaudhry Shujaat Hussain.
Federal ministers Tariq Bashir Cheema, Chaudhry Saalik Hussain and Special Assistant to the Prime Minister (SAPM) Malik Ahmad Khan were present. Both bigwigs pledged to strengthen mutual cooperation and collaboration to take the country out of economic and political turmoil.