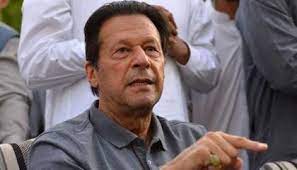 ISLAMABAD: A banking court in the federal capital on Thursday extended interim bail of PTI Chairman Imran Khan in the prohibited funding case till Jan 31.

The court also exempted the PTI chief from appearing in the case till next hearing while a plea seeking permission to interrogate Imran Khan at his Zaman Park residence in Lahore has been turned down.

The banking court ordered the former premier to appear before the investigation officer in the case to join the probe. The judge also remarked why it should not withdraw the decision of granting interim bail to Mr Khan.

During the hearing, the prosecutor asked the court to cancel the bail of the PTI chief as he had been running the party’s political affairs since the November attack on him but he was reluctant to show up in court and join the investigation.

The PTI lawyer told court that Mr Khan sustained injuries in the attack and he would appear before the court once he was allowed by his doctors.

He said the PTI chief had always supported the rule of law in the country.

The FIA’s Corporate Banking Circle had lodged the prohibited funding case against 11 people including the former prime minister for violating the Foreign Exchange Act. Other suspects in the case include Sardar Azhar Tariq, Saifullah Niazi, Syed Younas, Amir Kiyani, and Tariq Sheikh.

The FIR stated that the accused are beneficiaries of the private bank account, while the PTI had an account at the local bank and the private bank manager has also been nominated in the case.

According to the text of the FIR, a bank account was created in the name of Naya Pakistan, the bank manager allowed to operate the illegal bank account and the $2.1 million were deposited by the Abraaj Group of Companies in the bank.