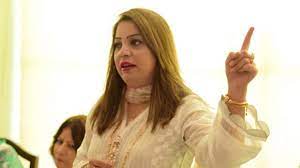 LAHORE: Pakistan Tehreek-e-Insaf (PTI) lawmaker Momina Waheed announced that she would not give a vote of confidence to Punjab Chief Minister Chaudhry Parvez Elahi.

In a statement, the PTI lawmaker said diehard supporters of the party were disheartened as CM Parvez Elahi was announcing development projects for only Gujrat and Mandi Bahauddin.

She also claimed that some other MPAs would also not support the chief minister in the upcoming trust vote.

Earlier it was also reported that the Majlis Wahdat-e-Muslimeen (MWM) announced that it would also not give a vote of confidence to CM Elahi.

In a statement released by the party, the MWM Political Council said that it has taken the decision after consultation with its leadership.

According to the party spokesperson, the MWM has expressed “serious concerns over some of Elahi’s actions” and said that its member of the Punjab Assembly Syeda Zahra Naqvi will not give him a vote of confidence.