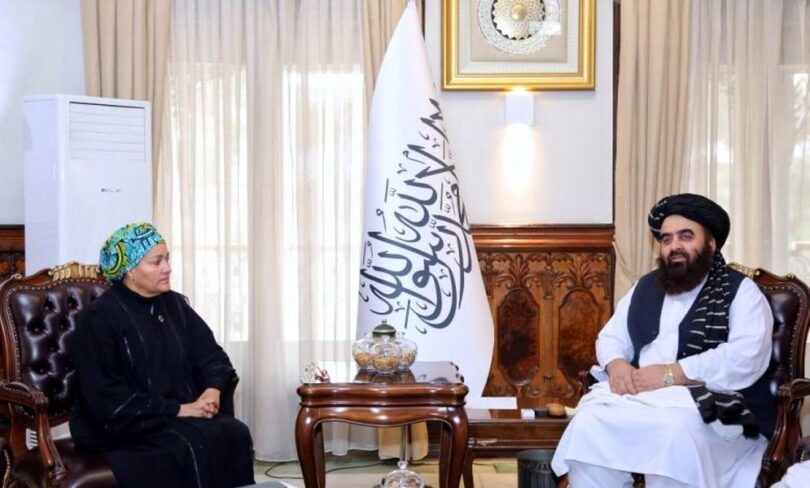 KABUL (Khaama Press): The United Nations Deputy Secretary-General Amina Mohammed and UN Women Executive Director Sima Bahous visited Kabul and met with the Taliban authorities to discuss Afghan women’s rights and other issues.
The senior UN delegation held meetings with UN staff, national and international NGOs, and Afghan women to get a good understanding of the situation and discuss ways to protect women’s and girls’ rights in Afghanistan, according to Farhan Haq, the UN Deputy Spokesperson.
In a meeting with Afghanistan’s Acting Foreign Minister Amir Khan Muttaqi on Wednesday, Amina Mohammed stressed the need to uphold human rights, especially for women and girls, and were encouraged by exemptions being introduced that have allowed the resumption of some humanitarian activities that had been hampered following the ban.
Minister Muutaqi expressed his gratitude and hoped that the UN delegation would portray Afghanistan’s true image to the international community.
“Women are engaged in educational and health sectors in significant numbers whereas those who used to work in government offices are paid salaries at home. The number of female inmates has reduced considerably and broad facilities have been provided in the business sector,” Muttaqi said.
Muttaqi also reiterated that not recognizing the Afghan government, travel bans on the Islamic Emirate authorities and restrictions on the banking system have led to numerous problems. To overcome these challenges, the international community needs to take positive in this regard.
Since the return of the Taliban to power in August 2021, followed by the disruption of international financial assistance, the war-torn country has been left once more in dire economic, humanitarian, and human rights crises.
Women and girls have been deprived of their rights, including the right to education, and disappeared from public life under the country’s ruling regime. Thousands of women have since lost their jobs or were forced to resign from government institutions and the private sector.