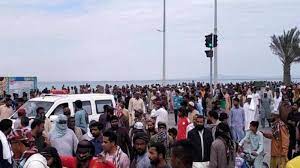 GWADAR: A police constable died when protestors of ‘Haq Du Tehreek’ (Gwadar Rights Movement) fired shots at the lawmen deputed around the demo in Gwadar.

According to the provincial government spokesman, the police officials were deployed around the site of a protest of HDT near Hashmi Chowk in Gwadar. The protesters sprayed on duty police with bullets leaving a cop injured seriously, the official said adding that the injured was rushed to the GDA Hospital where he breathed his last.

The spokesman said that the police force is patiently bearing the provocation of the protesters. An FIR will be registered against the protester’s leader Maulana Hidayat-ur-Rehman, who has been on campaign against the development of the port city.

Gwadar police arrested over 20 persons in connection with challenging the writ of the government. Hidayat is Jamat-e-Islami Balochistan General-Secretary. The participants of the sit-in demanded an end to illegal trawling and a reduction in security check posts.

The movement started in September 2021 and gained popularity also sweeping local body elections. Last year, the sit-in also went on for months and ended only after Chief Minister Balochistan visited the coastal city and gave assurances to resolve all the movement’s demands.

However, according to Hidayat ur Rehman, the authorities have failed to keep their promises and they were left with no other option but to restart the protests.

The provincial government spokesman said that direct firing at the policemen deployed from their security is regrettable.

Civil society and the citizens of Gwadar are also condemning the behavior and unjustified provocation of HDT‘s leaders. He said such incidents are intolerable, for which all the responsibility lies on Maulana Hidayat ur Rehman and his followers.

The police constable identified as Yasir received a bullet in his neck fired by an angry mob.

Balochistan IG Police Abdul Khaliq Sheikh said that the police despite its full power is fulfilling the promise of life and property of the common people. The officials are avoiding the use of firearms of any kind under any circumstances. The accused involved in the incident should be arrested soon, he added. (NNI)