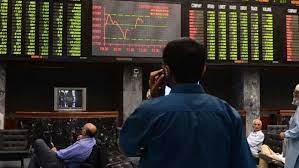 As many as 334 companies transacted their shares in the stock market; 211 of them recorded gains and 107 sustained losses, whereas the share price of 16 companies remained unchanged.

Safofi-Aventis witnessed a maximum increase of Rs42.00 per share price, closing at Rs1000, whereas the runner-up was Mari Petroleum with a Rs20.12 rise in its per share price to Rs1567.08.