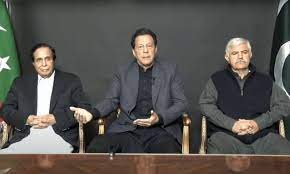 PESHAWAR: Pakistan Tehrik-e-Insaf (PTI) has apparently lost its footing after prematurely dissolving the Khyber Pakthunkhwa and Punjab assemblies as the party would now face a daunting challenge of mobilizing voters for the upcoming general election after shattering their confidence and leaving the province in a very difficult economic and post-flood situation.

The dissolution of the KP assembly where PTI enjoyed power for the last 10 years was being considered a big ‘political blunder’ by experts, who strongly believed that the party that came into power with the ‘slogan of change’ in 2013, would face great difficulty to regain power after leaving hundreds of thousands of flood victims alone and helpless besides poor service delivery and development work.

“Instead of sitting with the government for political dialogue for electoral reforms and strengthening the economy ahead of general elections, the PTI leadership has taken an illogical step by dissolving two provincial assemblies for which Imran Khan would pay a heavy price in the 2023 election,” said Wajid Ali Khan, former Provincial Minister and Awami National Party (ANP) leader while talking to APP on Friday.

He said it would have been better for PTI leaders to use the proper forum of parliament and assemblies for the fulfillment of their early election demands rather than prematurely dissolving the assemblies of KP and Punjab against the wishes and aspirations of the people.

Following the KP Governor’s signature on the assembly dissolution summary by CM KP Mahmood Khan’s cabinet all provincial ministers, advisers, and special assistants stand dissolved and cease to hold offices while the process of caretaker setup was started in the province for which the KP Governor had already written a letter asking CM KP and Opposition Leader Ikram Durrani to nominate a candidate for caretaker CM slot.

He said that it would have been better for PTI to help over 33 million people marooned by last year’s summer’s floods and rebuilding of their destroyed homes rather than wasting economic resources in the snap polls. Wajid Ali said the tenure of the present government would come to an end in August this year and the national general elections have to be held within three months after the completion of the mandatory period of the national assembly, Sindh and Balochistan assemblies. “Let the people of Pakistan decide about the fate of political parties on the basis of their election programs and past performance during the 2023 elections.”

He said it was extremely unfortunate that yet another KP Assembly and Chief Minister did not complete his constitutional five-year term and CM Mahmood Khan has sacked his own government despite enjoying a two-third majority to please Imran Khan. Hamaza Khan, PMLN Nowshera President said the dissolution of provincial assemblies showed that Imran Khan was unnerved after his corrupt practices were exposed in PTI’s foreign funding and Tosha Khana cases by ECP.

“The double standard politics of PTI leaders were badly exposed before masses after resignations of PTI MNAs and they would now face people’s wrath in the upcoming general elections, especially in KP and Punjab.” Hamza Khan said Imran Khan had neither fulfilled the promise of construction of five million houses nor provided jobs to 10 million people and did not honor his promises of converting PM and Governor Houses into public universities and libraries.

He said a billion trees afforestation project was taken over by the NAB exposing PTI’s tall claims of good governance while the construction cost of Arbab Niaz International Stadium at Peshawar and Kalam cricket ground in Swat was increased manifolds due to long delay in work during PTI’s tenure. Professor Dr. AH Hilali, former Chairman Political Science Department, at the University of Peshawar said the dissolution of the KP assembly was beyond his understanding as CM Mahmood Khan’s government was enjoying two third majority having still eight months left in his five years constitutional tenure. He said PTI’s decision to dissolve KP assembly would have serious political repercussions in the province’s politics in the future.

“Pakistan has a long history of political intolerance where losing parties and candidates leveled serious rigging allegations against winning parties, which either led to premature dissolution of the national and provincial assemblies or mid-term election besides derailment of democracy four times in the past,” he said. Recalling the government of former Prime Minister Zulfiqar Ali Bhutto, he said the government of the founder chairman of PPP was overthrown after the nine religious-political parties of the joint opposition from the platform of Pakistan National Alliance (PNA) had launched a mass agitation movement claiming electoral fraud and systematic rigging during 1977 general election.

“PNA had launched an agitation movement after it bagged only 36 seats while PPP secured landslide victory with 155 seats and one seat was bagged by PML (Qayyum) and eight seats by independent candidates in total 200 seats of the Parliament during 1977 general election.” Despite the strong denial of the rigging allegations by PPP, he said PNA’s agitation movement sparked riots and unrest in the country after massive demonstrations and violent anti-Bhutto protests, and later democracy was derailed for a third time on July 5, 1977.

Citing another example of political intolerance, Dr. Hilali said the elected governments of PPP and PMLN had been dismissed on allegations of corruption and rigging in elections during 1988-1999 and its negative outcome came before us in the shape of October 12, 1999, martial law. The nation still remembered the 2014 aimless sit-in staged by PTI Chairman Imran Khan and Pakistan Awami Tahrik (PAT) Chairman, Dr Tahirul Qadri who accused PMLN of rigging in the 2013 general election and not accepting each other’s mandates.

PTI and PAT’s allegations were later rejected by the high-powered commission led by former Chief Justice of Pakistan, Nasirul Mulk who declared that the 2013 elections were organized and conducted fairly and transparently in accordance with the law and constitution. The Commission had also ruled that PTI’s request for a probe was not justified. Dr. Hilali said KP has a long history where the majority of Chief Ministers could not complete their five years terms due to political intolerance.

The province’s first CM Dr. Khan Sahib ( March 8, 1946, to March 22, 1947), and other chief ministers including Sardar Abdul Rashid Khan (April 23, 1953, to July 18, 1955), Sardar Bahadar Khan (July 19, 1955, to October 13, 1955), Maulana Mufti Mahmood (May 1, 1972, to February 12, 1973) and Sardar Inayatullah Khan Gandapur (April 29, 1973, to February 16, 1975) could not complete their five years tenure mainly due to political intolerance and not accepting each other mandates.
He said former Chief Ministers Nasurullah Khattak, Muhammad Iqbal Jadoon, Arbab Muhammad Jehangir Khan, Aftab Ahmed Khan Sherpao, Mir Afzal Khan, and Pir Sabir Shah had failed to complete their constitutional tenure. The latest victim of political tolerance was Chief Minister Mahmood Khan, who could not complete his five-year term despite enjoying a two-thirds majority and dissolving his own assembly a few days ago. Former Chief Ministers Akram Khan Durrani (November 30, 2002, to October 11, 2007, of JUIF) Amir Haider Khan Hoti (March 31, 2008, to Marcy 20, 2013 of ANP), and Pervez Khattak (May 31, 2013, to June 6, 2018) of PTI completed their five years term.

The experts said most political parties were contesting elections to form a strong government on the basis of a powerful parliament to implement its election manifestos, fulfill promises made with electorates, and make legislations in the country’s interest rather than prematurely dissolve the assemblies. They expressed the hope that the political parties including those in government and opposition would shun political differences and sit together for a broad-based and inclusive political dialogue for electoral reforms ahead of the general election and take the country out of existing difficult challenges. (APP)