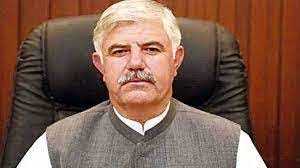 PESHAWAR: Chief Minister Khyber Pakhtunkhwa Mahmood khan has said that PTI has become the most popular party amongst general public as well as political classes adding that despite the end of its tenure in the province, people and political figures are joining PTI.

This is evidence of their firm conviction and confidence on its dynamic and sincere leadership. Imported politicians have failed in denting the political stature of PTI, he added. The Chief Minister expressed these views while addressing the joining ceremony of prominent political figures from district Dir on Thursday. MNA Bashir Khan and ex Provincial Minister Mohibbullah were also present on the occasion.

Similarly, president of QWP from Temergara, Khizar Hayat also announced joining PTI. The Chief Minister welcomed the newcomers to the fold of PTI and paid rich tribute to them for choosing a political party which is representative of Pakistanis. The Chief Minister said that PTI has wiped out all the political parties at grassroot level due to their sincere leadership and development initiatives.

He made it clear that Imran Khan is the only leader who is fighting against corrupt political mafias single handedly. This is the reason why people have faith in his leadership, he said and added that only Imran Khan has the ability to steer the country out of the current economic cries.

The chief minister maintained that the conglomerate of corrupt political leaders has been exposed and these people cannot deceive people anymore. Talking about the development and welfare strategy of the provincial government, the Chief Minister said that his government has taken concrete steps in all the sectors; a number of reforms and development initiatives have been completed to align the health, education and other social services institutions with contemporary needs.

Our efforts have started yielding positive results in all the sectors, he remarked.
The Chief Minister said that PTI will form government with a huge majority and will achieve its targets regarding equal development of all areas of the province. He also announced the holding of a grand public gathering in district Dir soon. The Chief Minister said that his government has paid special attention to the development of Dir and other backward districts adding that a new district “Central Dir” and three new tehsils have been notified formally, which was a long-standing demand of the people.

On this occasion, the delegates expressed their firm commitment that they will fully support Pakistan Tehreek-e-Insaf in the upcoming general elections and will sweep the polls in district Dir. MNA Bashir Khan talking on the occasion has said that due to the development funds provided by the provincial government, several development projects have been completed in Dir district, including the establishment of a university, the completion of a medical college, the completion of the Koto Hydropower Project, grid stations and establishment of cadet college.