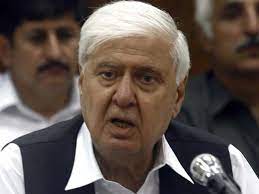 PESHAWAR: Qaumi Watan Party (QWP) Chairman Aftab Ahmad Khan Sherpao on Saturday said that Pakistan Tehreek-e-Insaf (PTI) leader Imran Khan was pushing the country towards anarchy to avoid facing accountability for the misuse of his powers as the prime minister.

According to a press release, he made these remarks while addressing a well-attended public gathering at Tangi tehsil in the Charsadda district. Aftab Sherpao said that details of Imran Khan’s illegal practices of how he sold the state gifts at throwaway prices and violated the relevant rules were now emerging with each passing day so he was trying to create political instability to divert the attention of the people from his corruption.

He said the PTI chairman took U-turns on every issue and was changing his narrative on a daily basis. He said Imran Khan had now started criticizing the ones, who helped bring him to power. “Who will trust Imran Khan? He has not even spared his benefactors,” he believed. The QWP leader said the former prime minister wanted the country to go bankrupt to pave the way for his return to power.

However, he added the Pakistan Democratic Movement-led government was working hard and there was no chance of the country going bankrupt.

He said Imran Khan strained the country’s relations with the US, Saudi Arabia and China when he was the prime minister. He said the PDM government was trying to restore the strained relations. The QWP leader said Imran Khan did not have the authority to dissolve the provincial assemblies of KP and Punjab. He said that even the chief ministers concerned and the PTI lawmakers were not in favour of dissolving the assemblies.

About the Khyber Pakhtunkhwa chief minister’s threat to stage a protest sit-in against the federal government, he said it was a political gimmick to deceive the people. He said the chief minister should tell the nation how much money the province received from the Centre when Imran Khan was the prime minister. ` He said the chief minister was performing groundbreaking of uplift projects in various parts of the province to win political support, but he would not be able to execute the schemes as KP did not have funds to give salaries to government employees let alone undertaking development work.

He said the provincial government did not have money to pay salaries, adding the debt of the province had soared from Rs97 billion to Rs791 billion. He said the PTI leaders were responsible for the economic crisis which the province was facing as they had been ruling KP for straight nine years. He said the PTI government introduced legislation for the use of the official helicopter to prevent Imran Khan from facing the law for the misuse of the copter. He said it was Imran Khan, who violated the agreement with the International Monetary Fund when he was going to face the no-confidence motion to save his government, but this tactic did not work.