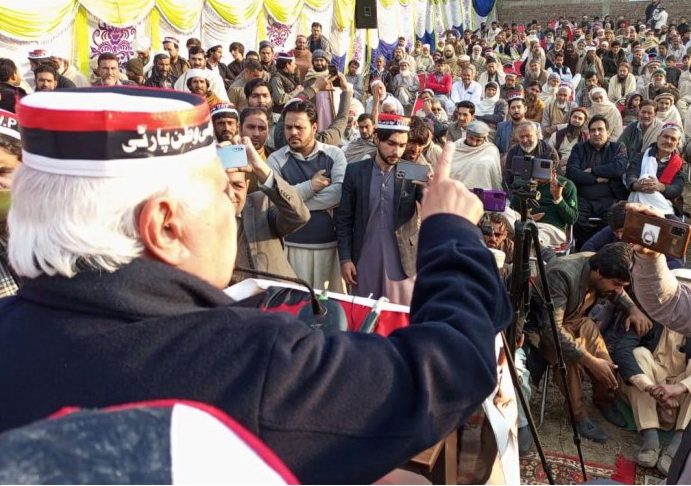 CHARSADDA: Qaumi Watan Party (QWP) Chairman Aftab Ahmad Khan Sherpao on Friday said the Khyber Pakhtunkhwa Assembly was dissolved to pave the way for Imran Khan’s return to the power corridors. He was addressing a gathering in Tangi tehsil in the Charsadda district.

Aftab Sherpao said that the people were politically aware and they would not let the PTI come to power again. He said the PTI ruled Khyber Pakhtunkhwa for nine and a half years, but left the province buried under huge loans. He said the dissolution of the KP Assembly showed that this was a selected government and the PTI leaders had no concern for the problems of the people.

He said Imran Khan wanted to satisfy his ego and was least bothered to consider the challenges facing the country.

The QWP leader said the PTI government had been imposed on the country and the province under a conspiracy and the ones, who had helped Imran Khan become the prime minister, were also responsible for the prevailing mess. He maintained that the Pakistan Democratic Movement-led government was striving to revive the economy and to clear the mess left behind by the PTI government.

“The PDM has put its political capital at stake for the sake of the country,” he added. He said the country could not afford political instability at this critical juncture, adding that political stability was necessary for economic stability. Aftab Sherpao said now the people would decide the future of the country through the power of their votes. He said that serving the people was one thing while making claims on the social media was another thing.

He said the wrong policies of the PTI government led to the deteriorating in the law and order in Khyber Pakhtunkhwa, adding that terrorism was once again rearing its ugly head in the province.

Holding the PTI responsible for the prevailing crises, he said that Imran Khan and his team ruined the economy and added to the woes of the common people. He said KP produced surplus gas and electricity, but its residents were facing prolonged outages of both the commodities. He said the PTI rulers could not secure the provincial rights. He added the people of the merged districts were also unhappy over the unfulfilled promises.