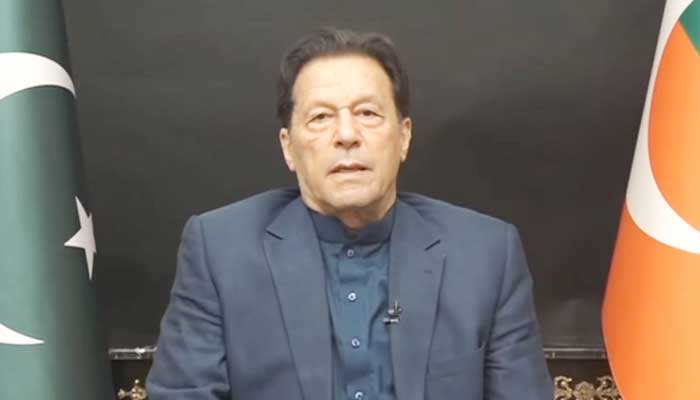 LAHORE (Agencies): Pakistan Tehreek-e-Insaf (PTI) Chairman Imran Khan announced Monday that his party would take to the streets tomorrow (Tuesday) against Mohsin Naqvi’s appointment as Punjab’s caretaker chief minister, vowing that he would not accept a “corrupt” person in such a high-ranking post.
In a televised address, the former prime minister said he foresaw the appointment of people to top offices after the election of Naqvi — who took oath as the caretaker CM a day earlier. “When I was in power, I received a report about a man who tried the most to topple [PTI’s] government. His name was Mohsin Naqvi. The intelligence bureau also gave a report on his activities,” Khan said, expressing his concerns over the media mogul.
“Mohsin Naqvi will bring all those people who are our staunch opponents,” he added. Continuing his tirade against the newly-appointed Naqvi, Khan said: “When I was in power, I received a report about a man who tried the most to topple [PTI’s] government. His name was Mohsin Naqvi. The intelligence bureau also gave a report on his activities.” The deposed prime minister, whose government was toppled last April due to a no-confidence motion against him, censured the Punjab interim chief minister for his association with the Pakistan Peoples Party (PPP) Co-Chairman Asif Ali Zardari.
“What would be the reputation of a man whom Zardari takes as his son? Naqvi neither possesses the moral standards nor the impartiality,” Khan said. The PTI leader also deplored the Election Commission of Pakistan’s (ECP) decision to appoint the media mogul as chief executive of the country’s biggest province. “The standards of our democracy have degraded so much that no one trusts the government to conduct transparent elections. The basic reason behind a caretaker government is its neutrality.”
The former premier lamented that the names proposed for the interim CM slot by his party were all rejected. “We chose Nasir Khosa’s name thinking they will like it. Ahmed Sukhera was the cabinet secretary at the time, we thought there wouldn’t be an objection to him too. Naveed Akram Cheema was also [Prime Minister] Shehbaz Sharif’s secretary. But they rejected all our names.” According to the PTI chairman “peaceful” protest demonstrations will be held in Lahore and Rawalpindi on Tuesday and Wednesday respectively, he said, adding that later they would hold protests in Faisalabad, Multan and other cities.
“Protest demonstrations will be staged in different cities on daily basis,” Khan revealed the party’s future strategy against the interim CM. “We do not accept Mohsin Naqvi as caretaker chief minister at all.” Slamming the electoral watchdog, the deposed prime minister said that nobody has harmed the country more than the ECP. The election should be held within 90 days after the dissolution of the assembly, he further said.
Raising questions on the impartiality of the ECP, the PTI leader said if the electoral body was to appoint “such a person” then what happened to its claims that the caretaker CM should be unbiased? The move is taken in line with the agenda to oust Imran Khan and the PTI from the political process in the country, the ex-PM added. He urged the masses to support the PTI for their future.
Lashing out at the country’s top election organising authority, the PTI chairman said that he had never seen such a dishonest ECP in his life. “Every decision of this ECP comes against us.” He added that they moved the top court against the judgements of the ECP eight times and the apex court nullified the verdicts of the electoral watchdogs. Terming the Toshakhana case as a “big joke”, the deposed prime minister said that the incumbent government provided all the details about him in the case but when the court sought a record, they say “it is secret”.
He also accused PML-N supremo Nawaz Sharif and Zardari of stealing vehicles from Toshakhana. Speaking about his key demand after being removed from the helm of power, Khan said that elections should be held in Punjab prior to the holy month of Ramadan. He added that his party would move the court against the appointment of Naqvi as caretaker chief minister and seek a date for the general polls in the province.
“Just like in Karachi, the thieves want to be imposed on the country through the rigging,” he added. He urged the masses to take to the streets against the thieves. The PTI chief maintained that his party accepted the nomination of Khyber Pakhtunkhwa’s interim CM Azam Khan after the Jamiat Ulema-e-Islam-Fazl (JUI-F) suggested the “correct name”.