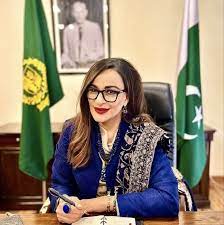 ISLAMABAD: Federal Minister for Climate Change, Senator Sherry Rehman has said that the “irresponsible attitude” of Pakistan Tehreek-e-Insaf (PTI) leadership over the parliamentary role condemnable and PTI’s accusing government of non-serious approach on the matter is baseless.

In series of tweets, she criticized the recent statement by PTI Vice President Shah Mehmood Qureshi, who claimed that the PTI was ready to play its parliamentary role but the government was not serious.

Sherry Rehman said the PTI leader had confirmed that its members were willing to return to Parliament, but it appeared the PTI members were sitting out only “because of the ego of one person” (Imran Khan).

“The minister of Foreign Affairs represented the government, whereas the reaction of the PTI leader to the foreign minister’s proposal was a proof of his (Shah Mahmood Qureshi) insincerity”.

It is pertinent to mention that Foreign Minister Bilawal Bhutto Zardari, while addressing to the public rally on the occasion of Benazir Bhutto’s martyrdom anniversary in Garhi Khuda Bakhsh, Larkana, the other day, asked the PTI chief to return to the Parliament.

Sherry Rehman further stated that the PTI was not advised by the government to leave and dissolve the assembly. Therefore, accusing the government of being insincere was contrary to the facts. “Will the leaders of PTI blame the decisions of Imran Khan on the federal government?” Sherry Rehman queried.

“You are sitting outside the National Assembly, you have announced the dissolution of the provincial assemblies (KP, Punjab) and your members are not allowing the Senate session to continue.