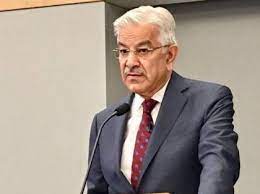 ISLAMABAD: Minister for Defence Khawaja Muhammad Asif on Wednesday said the government would decide market and business closure timings in consensus with traders’ associations and stakeholders for effective implementation of the national energy austerity drive.

The inister briefed the participants on the government’s vision to ensure energy conservation through less consumption in the commercial sector. The initiative is also intended to relieve the burden on the country’s foreign reserves that are being doled out every year for the import of oil and gas to ensure power production, he added.

The import bill of fossil fuels for power production comprised of 20 percent of the total imports expenditure of $80 billion a year that it could not afford further due to the growing burden on the economic resources of the country, Khawaja Asif said. “The country is blessed with 365 days a year with full shining sun that can be well utilized to generate energy which is cost-effective and eco-friendly,” he added.

Chairman APAT, Muhammad Naeem Mir, President APAT, Ajmal Baloch, and others also participated in the meeting and presented their recommendations and suggestions on the government’s proposal to implement closure timings of markets at 8 pm, dining halls at 10 pm and restaurants at 10 pm. (APP)