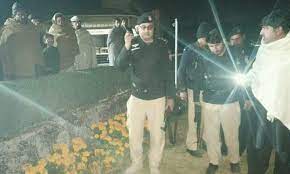 PESHAWAR: Unknown miscreants hurled a hand-grenade at the house of PTI MNA, Nasir Khan Musazai on Sunday’s night however no loss to life was reported in the incident.

According to Inqilab police, a hand grenade was thrown at the house of PTI MNA, Nasir Khan Musazai in Surezai area during night hours. The blast broke the window panes of the hujra and caused partial damage to the wall however no harm to life was reported.

Police said some important evidence has been collected from the crime scene and investigation into the incident has been started. The police have also launched a search operation in the area and said the case will be investigated from different angles to ensure the arrest of the perpetrators.