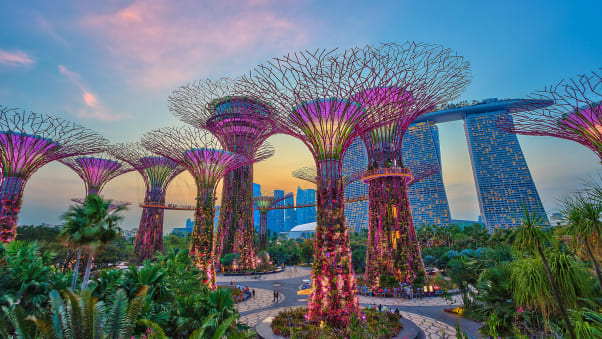 The 32-year-old says destinations like South Korea, Europe, Japan, New Zealand and Australia rank high on the list. But he has his eyes set on the US.

“When I have enough money, I’d like to visit America first,” he tells CNN Travel. “America is the leader in both the computer science and IT industries, so I want to visit Silicon Valley and famous universities like MIT, Stanford and so on.”

Dai is not the only Chinese citizen with hopes of traveling abroad, now that the Chinese government has removed quarantine entry requirements and is reissuing passports.

According to Trip.com Group data, outbound flight bookings increased 254% in late December, the day after it was announced that travel restrictions would be eased as of January 8.

“We are optimistic about the tourism outlook,” Wendy Min, head of media and executive communications at the Trip.com Group, tells CNN Travel.

“The latest policy announcement is encouraging, and we expect strong pent-up demand and increasing consumer confidence.”

The most popular destinations so far are Singapore, South Korea, Hong Kong, Japan and Thailand, based on Trip.com Group bookings. For long-haul destinations, the US, UK and Australia lead the pack.

“The trend we have seen is that short-haul flights are popular due to (lower) prices. Singapore, South Korea and Japan have always been quite popular with Chinese travelers, even pre-Covid,” says Min.

It makes sense for regional travel to recover first, says Dr. Wolfgang Georg Arlt, CEO of the China Outbound Tourism Research Institute (COTRI), since it is easier and less expensive to visit nearby destinations.

But the first quarter of 2023 will be almost exclusively urgent non-leisure travel, such as business trips, family reunions, student travel or healthcare needs, he adds.

Chinese business travelers will want to reconnect with the world’s major economies, like the US, Japan and Europe. In addition, destinations like the US, UK and Australia also attract many Chinese students, so some travelers may be planning reunions.

The first wave of leisure travel

According to Arlt, leisure travel will start to pick up in the second quarter of the year when things like passport and visa approval processes are running smoothly, and flights have fully resumed.

“Some leisure travelers will be very motivated to get a passport, visa and affordable ticket. Others will wait and see what stories the ‘pioneers’ have when they return,” he tells CNN Travel.

“The government spent three years making people in China feel afraid of the outside world, so some will still be anxious about whether it’s safe to travel.”

Throughout the pandemic, Chinese state media and the ruling Communist Party have repeatedly highlighted high death tolls in places like the US and UK compared to relatively low figures in China, as proof of the superiority of China’s authoritarian system.

“After all the stress and problems, and for many also grief (due to the high Covid-19 death toll in China), it can be expected that many will choose to get away from it all for a long weekend or at some beach resort in Vietnam, Thailand or Cambodia,” says Arlt.

Sienna Parulis-Cook is the director of marketing and communications at the Dragon Trail International digital marketing agency. She points to the Maldives as a beach destination of choice for affluent travelers in 2023.

“The Maldives appeals especially to the luxury market and those looking for a beautiful beach getaway — it’s also a destination that seemed to recover from the impact of Covid relatively quickly compared to other places in the world, so this might play into its popularity now,” she says.

Others will plan trips around hobbies, like mountain biking, hiking, wine-tasting, cooking and calligraphy.

“A lot of Chinese people have had time to develop their special interests (during the past three years),” says Arlt. “The pandemic has proven how fragile and short life can be, so doing meaningful things has become that much more important.”

The most desirable destinations

Luxury lovers have long been drawn to the Maldives.

Before the pandemic, China was the world’s largest outbound travel market by departure numbers and spending. In 2019, Chinese travelers took 154.6 million trips abroad and spent nearly $255 billion, according to the United Nations World Tourism Organization (UNWTO).

Based on COTRI data projections, overseas trips could reach 115 million — a rebound of about three-quarters — by the end of the year, including trips to the Chinese territories of Hong Kong and Macau.

Many of the same destinations will resume their top positions as travel rebounds, Parulis-Cook says.

In 2019, Thailand was the No. 1 most-visited destination by Chinese travelers, welcoming around 11 million Chinese tourists — over a quarter of the country’s overseas arrivals.

“The destinations that were popular before the pandemic are likely to resume their popularity when China reopens. The Chinese travel industry, and Dragon Trail, definitely expect destinations in Greater China (Hong Kong and Macau), Southeast, and East Asia to recover first,” says Parulis-Cook.

“They’re the closest to China, they have the most-recovered flight connectivity so far, and they are likely to seem safest and easiest for a first post-Covid outbound trip.”

Chinese travelers have had three years to dream about where they want to go and swap stories with friends, says Arlt, and there’s growing interest in discovering less conventional destinations.

Trip.com’s Min is a case in point.

“I am definitely ready to restart my travel adventures. I typically visited five new countries per year pre-Covid,” she says. “Now that connection and mobility are coming back, I’m looking forward to some solo backpacking and experiencing the world through my own eyes again.”

The travel enthusiast has ambitious plans to explore Cyprus, Oman, Iraq, Rwanda, Madagascar and Namibia in 2023.

“I’ve thought about Central America too but will have to see what time I have,” she says.

For example, Arlt says countries like Albania or Georgia are of interest.

Before the pandemic, Albania was just starting to appear on the radar for Chinese travelers. The country has centuries-old villages and authentic rural settings, which appeal to seasoned travelers, he says.

Georgia, meanwhile, attracts with its diverse mix of experiences: an urban adventure in the capital Tbilisi, skiing in the mountains, Black Sea beaches and ancient architecture.

“These are places that are still being discovered,” says Arlt, who will publish a book on the next wave of China’s outbound tourism later this month.

“Paris isn’t impressive anymore. If you tell your friends you’ve been to Albania, they will think you’re very special. That you have taste and a sense of adventure.”

According to Trip.com Group, Chinese travelers are gravitating towards small groups and independent travel, rather than large tours, and paying more attention to sustainability.

Arlt has observed the same trends.

“There are big changes in the demand and expectations of Chinese outbound travelers,” he says. “Young people in China are very interested in sustainability and green topics, as China is also suffering under the consequences of climate change.”

According to a 2022 Dragon Trail survey, 48.3% of prospective travelers said they would choose accommodation with environmentally friendly operations, 45.5% will choose cruelty-free ways to see wild animals and 37.9% will personally contribute to the local environment by picking up trash or cycling instead of driving.

But not everything has changed when it comes to what Chinese travelers want.

“Many post-pandemic trends and preferences in Chinese travel show continuity with (those) developing before the pandemic. Nature and outdoor activities, self-driving (renting cars for road trips), and a shift from large group tours to independent travel are all examples of this,” says Parulis-Cook.

“Seeking out open spaces and nature has been very popular during the pandemic — driven by the desire to get out of cities or away from crowds — but that was a major draw for Chinese outbound tourists before Covid, too.”

For example, a chance to stargaze or experience the aurora (or polar lights) was something that attracted Chinese travelers to places like Norway, Peru, Canada and New Zealand before the pandemic.

“One activity that really took off in China during the Covid era in a way they hadn’t before, is glamping,” she adds. “Glamping and camping was a fresh way to travel locally and be in nature during the pandemic, and it also became a trend on Chinese social media.”

Given its popularity in China, Parulis-Cook would not be surprised if travelers try glamping in places like Japan or Thailand, where local operators have already been advertising to netizens on Chinese social media.

There’s also an appetite for more long-term travel, such as living, studying or pursuing a career abroad, says Arlt.

“A lot of people will travel to different places to decide if they want to move to Singapore, London, Toronto or Sydney. These people probably will be (among the first to travel again).”

Given that China accounted for roughly 14% of the $1.8 trillion in global tourism spending in 2019, many destinations have anxiously awaited the return of the country’s travelers.

But just before China’s reopening, a flurry of entry restrictions and screenings came into effect. The US, Canada, Japan, Australia, India, Italy, the UK and France, among others, have announced plans to require a negative Covid-19 test before departure due to the country’s ongoing wave of infections.

Since China abandoned its zero-Covid policy and began partially reopening late last year, the subsequent Covid outbreak has overwhelmed hospitals and crematoriums, and triggered shortages of basic medicines. While the wave may have already peaked in some major cities, rural areas with fewer resources could be hit hard in January, with widespread domestic travel expected during the Lunar New Year holiday period.

Some studies estimate China’s Covid death toll could be in excess of a million if it fails to roll out booster shots and antiviral drugs fast enough.

The World Health Organization has advised against travel restrictions on countries experiencing Covid-19 outbreaks in the past but said it was “understandable” in this case due to a lack of transparent information, and encouraged China to share more data.

In response to the travel restrictions/screenings, International Air Transport Association Director General Willie Walsh issued a statement on January 4, admonishing countries for reinstating measures that have “proven ineffective” while “the virus is already circulating widely within their borders.”

“We have the tools to manage Covid-19 without resorting to ineffective measures that cut off international connectivity, damage economies and destroy jobs,” he says.

“When travel restrictions are country-specific — travelers from China, India or South Africa, to give some examples from the past years — rather than universal, they are much more effective in creating stigma than preventing the spread of Covid,” she says.

“Chinese travelers will have a lot of choices for their first outbound trip, and destinations without any entry restrictions will appeal to them as friendlier and easier to travel to.”

“I see all this discussion that Chinese travelers will feel uncomfortable having to do a test before departure to many destinations and will prefer destinations which do not ask for a test,” he says.

“Actually, they are not only used to testing and getting tests for free in China, they will also be happy to know that all the other passengers in their airplane have tested negatively as well.”