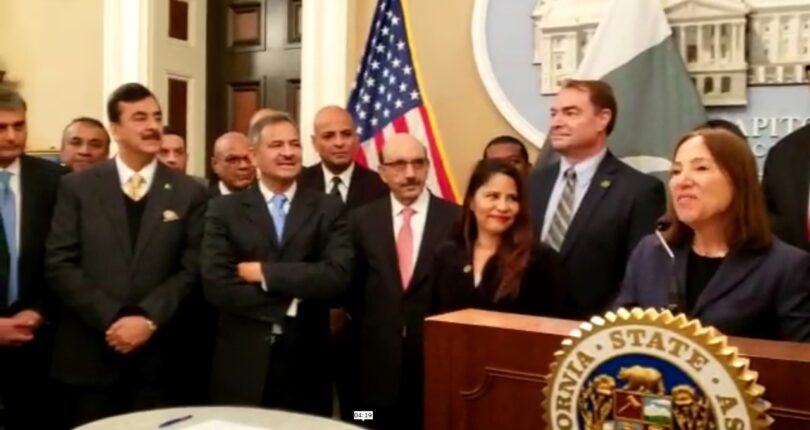 WASHINGTON DC: The agreement to declare Punjab and California as sister provinces was signed on 9 January 2023 at the State Capitol building in Sacramento, California.

Representing the state of California, Mr. Anthony Rendon, Speaker of the California State Assembly signed the agreement. On behalf of the government of Punjab, the agreement was signed by Mr. Wasif Khurshid, Chairman Planning and Development board Punjab. Ambassador Masood Khan witnessed the signing ceremony. Former Prime Minister Yousaf Raza Gillani was also present at the occasion.

The Ambassador and the visiting delegation of Pakistan were warmly received at the California State Assembly and the complete delegation was recognized and greeted at the floor of the House.

The sister province agreement between California and Punjab would promote mutual trade and commerce and increase the potential for educational, environmental, and cultural relations between the Province of Punjab and the State of California. This would also provide an opportunity to exploit the untapped economic potential and promote people to people contacts.

The state of California, which is among the top four economies of the world and a vibrant middle class of Punjab would create the required synergies for nurturing a mutually beneficial relationship and a win-win partnership.

The delegation earlier in the day also visited the University of California Davis, the leading agricultural and veterinary research university in the world and met Chancellor Gary May. Both sides discussed ways to strengthen the collaboration between UC Davis and Agriculture University Faisalabad and agreed to further build up on the partnership.

The two sides discussed ways and means to promote collaboration in export of mangoes and dates from Pakistan and agri-tech for Kinoos from the US. UC Davis support in hybrid seeds of wheat, cotton and rice also came under discussion. Cooperation on Climate smart agriculture was also discussed during the meeting.