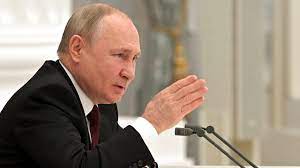 Russian President Vladimir Putin has informed the world that Russia wants an end to the war in Ukraine and seeks a diplomatic solution to the issue. According to the powerful oligarch, his country does not intend to spin the flywheel of military conflict, as all armed conflicts end one way or another with some kind of negotiation. The sole architect of the Russian Special Operation in Ukraine blatantly claimed that he never gave up diplomatic track and the sooner the other side realizes the fact, would be the better.

After ten months of enraged war and fierce hostility, Russian belligerence has resorted to negotiation and diplomacy to de-escalate the conflict which largely seems to be an outcome of continuous defeats and a significant backslide in Moscow’s military position in the ongoing war in Ukraine. Interestingly, Russia had used all its military might to undermine the Ukrainians’ will to fight by sending barrages of missiles and destruction of essential supply lines including water, heating, and electricity to Ukraine’s major population centers amid freezing winter but could not comprehend its agenda. Apparently, western collective strategy and unrestricted economic and military assistance to Ukraine along with stringent economic sanctions against Kremlin successfully neutralized the Russian invasion and desperate Moscow was left with limited options, either negotiate peace with its staunch enemy or expand the war to other nations to achieve strategic superiority over its foes.

Putin’s statement came a day after US President Joe Biden hosted Ukrainian President Volodymyr Zelensky in the White House and promised him continued and unwavering US support agaisnt Russia. Western officials term Russia’s quest for a dialogue a time-buying technique to provide some space to its exhausted Russian military that had made repeated retreats over the past weeks. On the other hand, the Zelensky regime in Kyiv is over-optimistic about Kyiv’s military position and demanded Russia halt its attacks and give up all territory it has seized so far.

In fact, diplomacy is a kind of soft war during which contesting parties achieve their desired objectives by peaceful means and prove their claim through undeniable research work and scholarly evidence. Historically, diplomacy had been the most effective tool for securing global peace and resolving the most complicated and sensitive issues relating to global security such as the global Nuclear Nonproliferation Treaty, Strategic Weapons Reduction Treaty, Cuban Missile Crisis, and Global Climate Accord as well as Iran Nuclear Deal. Thus Ukraine dispute merits a responsible diplomatic approach, national resilience, and patience from all stakeholders to reach an endurable and long-lasting peace in the region.

Russia and the west, both had used their wits to defeat others in the ongoing war in Ukraine, while the America-Russia rivalry had destroyed the Ukrainian nation and billions of dollars of resources would be needed for the reconstruction and rehabilitation of the East European Nation. At the same time, the Washington-Moscow tussle had also ruined the global economy and pushed a number of world nations into an economic upheaval. Currently, Western nations and Russia face no hazard to their sovereignty other than internal chaos and economic vulnerability, therefore they should not exaggerate the self-imaginary threats to them. Fueling the ongoing conflict has no other outcome except shoving the world into a global conflict thus negotiation is the only way forward to reach a consensus that protects the interests of all neighbors and guarantees territorial sovereignty and peaceful coexistence of all regional states.