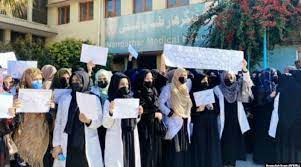 KABUL (Tolo News): The closure of universities for women has faced continuous reactions within and outside the country.
Dozens of female students held a protest near the Kabul University in the west of Kabul, calling for women and girls’ access to education and work. The European Union in a statement called the decision another violation of international obligations and said it constitutes an institutionalized and systematic “discrimination against women and girls.”
“Every child should have access to both primary and secondary education without discrimination of any kind, irrespective of the child’s religion, sex, ethnic or social origin, disability, or any other status,” the statement reads. The statement said the Afghan women are essential for the prosperity and stability of the country. “The EU expects from the Taliban to abide by their obligations, revert their decision, and ensure universal access to quality education throughout the country,” the statement regards. A joint statement from Foreign Ministers of Australia, Canada, France, Germany, Italy, Japan, the Netherlands, Norway, Spain, Switzerland, the United Kingdom, and the United States of America and the High Representative of the European Union condemned the decision of the Islamic Emirate for suspension of higher education for the girls’ students.