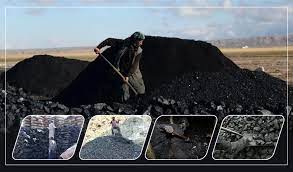 KABUL (Pajhwok): Some coalmines owners in the Dara-i-Suf district of northern Samangan province says without certain companies who have coal purchase contracts others are not allowed to purchase coal and this faced the coalmines owners with huge problems and may force them to stop mining.
But the Ministry of Mining and Petroleum said no hurdle existed to halt coalmining in Dara-i-Suf.
On October 16, a government committee decided store 400,000 tonnes of coal in different municipality districts of capital Kabul. People will be able to purchase a tonne of coal against 9,000 afs.
Currently one tonne of quality coal sold at 16,000 afs and low quality coal at 7,000 afs in Kabul markets but in Dara-i-Suf one tonne of coal was sold against 1,200 afs to 2,000 afs.
On November 22, the MoMP announced that 300 trucks loaded with coal had arrived in Kabul which will provided coal to the people at the rate of 9,000 afs per tonne.
According to the source contract had been signed with eight companies to deliver coal to Samangan.
Mohammad Amiri, head of a coalmining company in Dara-i-Suf, said that government purchased third or fourth grade coal at a low cost with tax exemption and sold it at 9,000 afs per tonne on public.
He said: “Without contractors, businessmen and other individuals are not allowed to purchase coal in Dara-i-Suf and some companies that excavated coal at a higher rate refused to purchase them at low rate because they will suffer loss therefore up to 60 percent coalmining companies had stopped their activities.”
He said in the past one tonne of Dara-i-Suf coal was accounted for up to 5,000 afs in the excavation site but now contracting companied purchased one tonne of coal up to 1,500 afs at a time when coalmine owner spent 2,500 on one tonne coal to excavate it from the mine.
He said in dara-i-Suf coalminers did not sold their reserves from the past 45 days because they suffer loss.
He asked the government to allow other companies and individuals apart from contract holders to open the market for coal purchase.
“Even our wood and other related materials are not allowed, our work had stopped, labour are asking for the money and we cannot sold our coals at a low cost to the contract holders, this problem should be resolved,” he said.
According to Amiri he came to Kabul with some other companies owners and held meeting with the government officials but no assurances had been given to them regarding the resolution of the problems.
Another coalmine owner who wished not to be named raised similar issue and said people have invested in coalmining but currently they are faced with loss. He said companies holding the coal purchasing contract have demanded one tonne of coal for up to 1,400 afs. Sometimes some truckers want to buy it for up to 1,800 afs but they are fewer. Coal delivery to Kabul.
Mohammad Rasoul Totakhel, head of the Coal Exporters Union, has objected the transfer of coal to Kabul which is sold at low rate and said: “A delegation from Kabul visited Dara-i-Suf where it stopped an open coal purchase. We frequently contacted them and told them to buy the coal of your own choice but don’t stop the vehicle of common people. It is against the interest of this country and it is tyranny.”
But Mufti Mohammad Omaid Khurram, spokesperson for the MoMP, said there was no issue and hurdle existing in the way of coalmining in Dara-i-Suf. He did not provide more detail.
According to Totakhel, when coal was exported to Pakistan at that time one tonne of coal rate ranged from 3,000 afs to 5,000 afs but now it is sold from 1,200 afs to 1,800 afs.
The MoMP on in July said that up to 15,000 afs tonnes of coal was exported to Pakistan from Afghanistan but lately it did not provide any information in this regard.
He said currently, coal export to Pakistan has declined by 70pc and this caused coal rates to decline in Dara-i-Suf as well.
Totakhel said: “The reason why coal rates has surged in Kabul markets is because its export declined and government want to buy it a low rate and sell it to the people at high price.”
This comes that on December 05, one tonne of coal was sold at the $452 in international market while on November 11, the global rate was $323 and currently it stood at $400.
It was expected that with the subsidies sale of coal its overall rates will also decline but it did not happened.
Mia Jan, a coal seller in the largest coal market in Azizi Hotak area of Kabl, said coal from Dara-i-Suf could not be found in Kabul because government has limited access to contractor and everyone is not allowed to get coal from Dara-i-Suf. He said currently, coal available in the market was from Baghlan’s Tala Wa Barfak and its rate is high in the market at time when the quality of Dara-i-Suf coal was higher than Tala Wa Barak coal.
Mohammad Khan, another coal seller, said the rate of coal had surged and the reason was that without a limited number of companies others are not allowed to get coal from Dara-i-Suf. He said currently one tonne of quality coal was sold at 16,000 afs whiel a low quality of coal was sold at 7,500 afs.