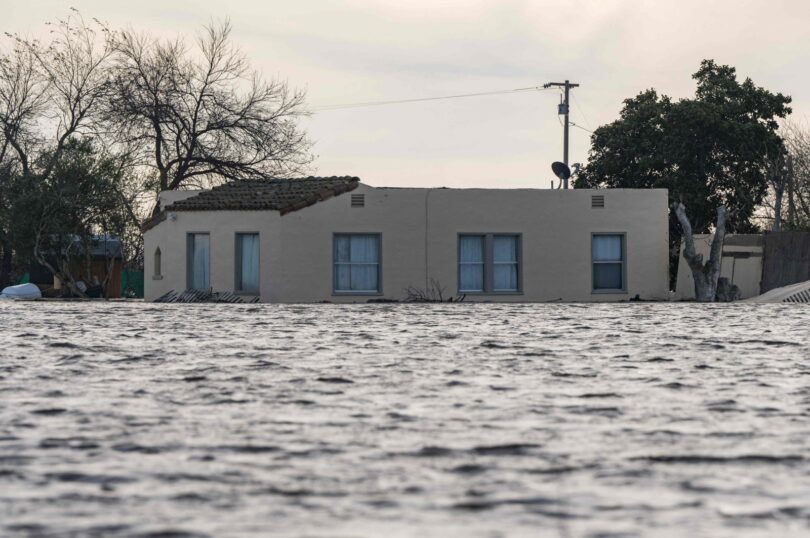 LOS ANGELES (AFP): For weeks near-record rainfall has battered California, sparking floods and landslides, coating mountains with a full winter’s worth of snow and raising reservoir levels. However, experts say even this much precipitation won’t reverse the state’s decades-long drought.

A parade of atmospheric rivers – massive flows of moisture dragged through the skies from the oceans – has unleashed staggering volumes of rain and snow since December.

San Francisco got more rain in the last two weeks than it has done in any similar period for 150 years, while the Sierra Nevada mountains have been buried in as much as 10.5 meters (33 feet) of snow.

Peter Gleick, the co-founder of the Pacific Institute in Oakland, a research organization that specializes in water issues, says it’s difficult to quantify exactly how much water has fallen from the sky.

“But we’re definitely talking about trillions of gallons (liters),” he told Agence France-Presse (AFP). “There’s no doubt that the water we’re getting now is a great help in eliminating the drought… But it is too soon to say that the drought is over. 2023 could be a wetter year than normal,” he said, but we’ll have to wait until the end of winter to know for sure.

The western United States is in its 23rd year of drought, with major rivers and reservoirs at a fraction of capacity. California’s largest reservoir, Lake Shashta, is only 42% full, official data shows, even after all this rain.

The monster snowpack in the Sierra Nevada mountains – it is currently twice what it normally is in January – is most helpful, because this provides the gradual run-off that drip-feeds reservoirs in drier months.

Beyond its reservoirs and snow reserves, the state faces a much deeper-seated problem with its depleted groundwater, says Nicholas Pinter, a geologist from the University of California, Davis.

About half of the measured wells in California have seen their water levels decline over the past 20 years, according to a report from the California Natural Resources Agency released in October.

And the torrents of rain that have fallen are not all that effective at recharging them – the soil became saturated quickly, so instead of being absorbed, subsequent downpours just ran off.

“Groundwater is like our retirement account. It’s slow to go in and we have to withdraw it very, very carefully,” says Pinter. “Only, a lot of California water users draw on that retirement account as if it was the savings for tomorrow.”

California’s vast agricultural sector – which supplies a swathe of America’s supermarkets – is a heavy user of this underground water. That intense need – coupled with big cities like Los Angeles that have nowhere near enough of their own water to support their populations – means almost no matter how much it rains, it will not be enough.

Human-caused climate change is already making itself felt, with average global temperatures up 1.2 degrees Celsius (2.16 degrees Fahrenheit) since pre-industrial times. That contributes to longer-term trends like the drought, as well as to the increasing ferocity of winter storms like those that are whipping the western U.S. coast now.

Adapting to the climate that we have altered is going to be key, says Gleick. That includes learning how to retain the water when it falls as rain, to tide us through the hotter, drier summers.

“California built levees to protect communities from flooding, but they prevent the aquifers from recharging,” he said. “Every major river would benefit from widening the floodplains, by moving the levees back from the river and letting the rivers flood more. Instead of thinking we can control all floods, we have to learn to live with them.”

Crucially, that means not assuming we can just go back to the way things were before a disaster struck. “When communities are hit by repeated flooding, we should not rebuild in the same place,” he said.