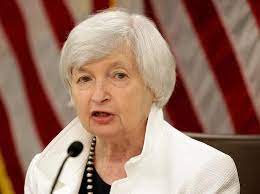 DAKAR, Senegal: I want to thank Mayor Senghor and everyone here for welcoming me to this Island. Today’s visit holds a special significance.

Here at Gorée Island, I can’t help but think about the unspeakable cruelty of those who engaged in the slave trade. I feel an overwhelming sense of sadness and pain thinking about those stolen from their families, their deadly journey across the Atlantic, and the horrific circumstances encountered by those who made it alive.

Ultimately, Gorée Island reminds us that the histories of Africa and America are intimately connected. Gorée and the trans-Atlantic slave trade are not just a part of African history. They are a part of American history as well. We know that the tragedy did not stop with the generation of humans taken from here. Even after slavery was abolished, Black Americans – many of whom can trace their descendance through ports like this across Africa – were denied the rights and freedoms promised to them under our Constitution. In both Africa and the United States, even as we have made tremendous strides, we are still living with the brutal consequences of the trans-Atlantic slave trade.

I think it is important not only to speak about the transgressions of those who engaged in the slave trade, but also to tell the story of the enslaved people. And that story, while full of suffering, is also full of perseverance and hope. In the United States, what is remarkable is how many African American men and women overcame the odds, created better lives for themselves and their descendants, and became central to our economy and democracy — building our cities, powering our industries, and bending the conscience of the United States and the world toward justice. All of this in the face of systemic social and economic injustice.

With remembrance, I believe, can come progress and renewal. And that is what we see here. Today, there are signs of vibrant life around Gorée — a prominent art scene, a place of education, and thousands who call this place home. And, inspired by America’s quest for racial justice, in 2020 the island’s main plaza dropped its colonial roots and changed its name to Freedom and Human Dignity Square. Gorée is now emblematic of what we all know well about the African continent itself: a hub of culture and activity, a land with a painful colonial past but a hopeful future, and a symbol of the enduring universal value of human dignity.

What I take from this place is the importance of redoubling our commitment to fight for our shared values and principles wherever they are threatened – in the United States, in Africa, and around the world. We have more work to do.