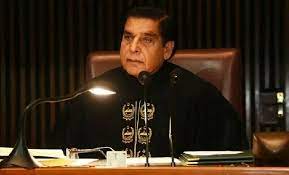 The PTI had resigned en masse from the lower house of parliament following the ouster of PTI chief Imran Khan in April last year. Subsequently, the NA speaker had accepted only 11 of the resignations, stating that the remaining lawmakers would be summoned individually for verification. The notification issued by the electoral watchdog on Tuesday, stated that the lawmakers were de-notified “with immediate effect”.

“But until you accept 70 more resignations, the posts of the NA opposition leader and the chairman of the Public Accounts Committee belong to the PTI,” he said. PTI central information secretary Farrukh Habib alleged the NA speaker had accepted the resignations with “ill intent” because he found out that the PTI intended to remove Raja Riaz as the NA opposition leader.

PTI leader Hammad Azhar alleged that the Election Commission had “received orders from Avenfield”. “Another clumsy attempt to run away from general elections,” he said. PTI’s Zulfi Bukhari said that the NA speaker had claimed he couldn’t accept the resignations collectively and each lawmaker had to verify their resignations individually.

“Imran Khan thinks of re-entering the National Assembly to seek a vote of no-confidence against Shehbaz Sharif. Within minutes there’s a mass acceptance,” he said. The PTI had announced mass resignations from the National Assembly in April last year, a day after party chief Imran Khan’s ouster as the prime minister through a no-confidence vote and shortly before Shehbaz Sharif was elected as his successor.
National Assembly Speaker Raja Pervez Ashraf on July 28, 2022 accepted the resignations of only 11 PTI lawmakers who had resigned after the vote of no confidence against the former PM. The PTI had first challenged the move in the Islamabad High Court (IHC) on August 1, contesting that it was “unsustainable”.

The IHC, however, had dismissed the petition on Sept 6, 2022. The party then approached the Supreme Court, praying it to set aside the IHC order, terming it “vague, cursory, and against the law”. A decision on the PTI’s plea in the apex court is still pending. Ashraf told a PTI delegation on Dec 29, 2022 that the party’s lawmakers would be summoned individually for verification of their resignations as the latter insisted on them being accepted in one go.