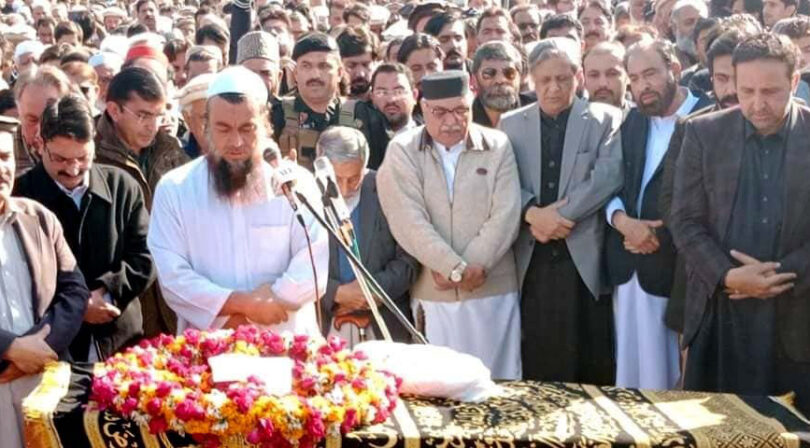 High rank political and social personalities, judges, lawyers and high-ups of civil and police officers including a large number of people attended the Nimaz e Janaza of Latif Afridi.

A joint Fateha was offered for the departed soul of the senior lawyer. On the occasion the participants of the funeral prayer paid tributes to the professional services of the deceased. Abdul Latif Afridi was shot dead in the Bar Room of the PHC the other day. The police have arrested the killer red handed who later confessed to killing Afridi over a family feud.

CJP expresses grief over Afridi’s killing: Chief Justice of Pakistan Umar Ata Bandial has termed the killing of veteran lawyer, politician and former president of SCBA Abdul Latif Afridi a big loss. The chief justice expressed these remarks during hearing of a case in the Supreme Court. CJP Bandial said that slain Afridi was a towering personality. He inquired of lawyer Iftikhar Gilani whether Afridi belonged to Kohat. The lawyer replied that he hailed from the Frontier Region.

Chief justice of Pakistan went on to say that he was sad when he heard that Mr Afridi was killed in the bar room. “It’s a very tragic incident,’ the CJP added.

Meanwhile, the Pakistan Bar Council has given a countrywide strike call for today to condemn the gruesome murder of the veteran lawyer and former president of Supreme Court Bar Association. The protest call was given by PBC Vice Chairman Hafizur Rehman and other officials.

The Punjab Bar Council and Lahore High Court Bar have also decided to not appear in courts today in order to register their protest against the killing. The bars demanded of the authorities to give exemplary punishment to the murderer. Mr Afridi remained at the forefront of the struggle for the rights of the community and played a key role in the lawyers’ movement in 2007. He had also remained the vice chairman and a member of the Pakistan Bar Council.

“The killer, a junior lawyer who was wearing his gown, opened fire at close range and then handed himself over to the police,” Ijaz Khan, a senior police official in Peshawar, said. The gunman who claimed that he had a feud with Afridi fired six shots at 79-year-old lawyer’s chest from less than a foot away. The Namaz-i-Janaza of Latif Afridi was offered at Hayatabad in Peshawar on Tuesday. A large number of people including important personalities attended the funeral prayers.