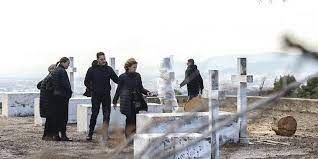 ATHENS (AFP): The funeral of Greece’s last king, Constantine II, will take place on Monday with a host of European royalty expected to descend on Athens for the service.

The ceremony will see royals from Britain, Denmark, Luxembourg, Monaco, the Netherlands, Norway and Spain pay their respects to the former monarch, who died on Tuesday aged 82.

But there has been controversy in Greece over the funeral arrangements.

Constantine was a divisive figure in the country’s history and the government has decided not to grant him the honour of a state funeral.

The private service begins at noon at the Athens Metropolitan Cathedral, with almost 200 guests expected.

The British Crown will be represented by Princess Anne, daughter of the late queen Elizabeth II. King Charles III, cousin of the former Greek king, and Constantine’s godson Prince William are not expected to join her.

The Greek government will be represented by Deputy Prime Minister Panagiotis Pikrammenos and Culture and Sports Minister Lina Mendoni.

Hundreds of people lined up in front of the cathedral early on Monday.

But many Greeks feel either indifference or resentment towards the former king.

The last member of a century-long dynasty, Constantine had reigned for just three years when a brutal army dictatorship seized control of the country in 1967.

Declassified US diplomatic cables say Constantine may have been mulling martial law himself prior to the coup.

He fled to Rome with the rest of the royal family, and later to London.

The junta abolished the monarchy in 1973, and Greeks voted not to restore the royal family after the restoration of democracy in 1974.

Later locked in a bitter property dispute with the Greek state, Constantine had his Greek citizenship revoked in 1994.

The ex-king returned to Greece in 2013, selling the 9,500-square-foot (880-square-metre) London mansion where his family had lived for four decades.

The day after Constantine’s death in a private Athens hospital, the prime minister announced the funeral would be held privately.

Mitsotakis insisted on Saturday it was the right decision, stressing that the former king was the leader of the “Kingdom of Greece, which no longer exists”.

He said history “will judge Constantine fairly and harshly”.

“I am embarrassed every time colleagues from abroad ask me why the former king is not buried with honours of a head of state while having been a head of state,” journalist and royals expert Christos Zampounis told ERT TV on Sunday, echoing wider criticism of the Greek government’s decision.

After the funeral service, Constantine’s body will be transferred to the royal tombs in Tatoi, about 29 kilometres (18 miles) north of Athens.

Constantine was married to Anne-Marie — sister to Denmark’s Queen Margrethe — and they had five children.

As crown prince, he won a sailing gold medal in the 1960 Rome Olympics and was an honorary member of the International Olympic Committee.