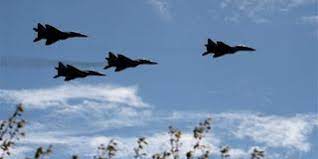 MOSCOW (AFP): Belarus said Monday that joint air force drills with Russia began on its territory, amid concerns Minsk was being dragged into the Ukraine conflict to fight alongside Moscow.

The drills will last until February 1, the ministry said earlier.

“The main goal of the exercise is to increase operational compatibility in the joint performance of combat training missions,” the ministry said in a statement.

All military airfields in Belarus will be involved in the drills, Minsk has said.

The ministry added that the exercises will involve training in aerial reconnaissance, joint patrolling of the state border, tactical air assault landing, the delivery of goods and evacuation of wounded.

Officials have described the drills as defensive.

He added that the situation on Belarus’s border with Ukraine was “not very calm” but Minsk is ready for “any provocative actions” from Kyiv.

President Alexander Lukashenko has insisted that he will not send Belarusian troops into Ukraine.

Belarus allowed Russia — its main political ally and chief creditor — to use Belarusian territory as a launching pad for its Ukraine offensive.

In October, Minsk said it was establishing a joint regional force with Moscow with several thousand Russian servicemen arriving to the country.