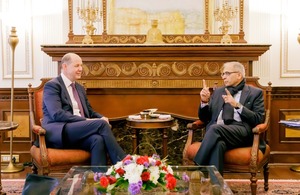 They reviewed strong progress made on the 2030 Roadmap in the last year and looked ahead to the next phase of bilateral cooperation.

The dialogue celebrated various milestones achieved in 2022; including an agreement on Mutual Recognition of Academic Qualifications signed in July; the bespoke Young Professionals Scheme confirmed by Prime Minister Modi and Prime Minister Sunak in November; and Trade Secretary Kemi Badenoch’s first visit to India last month for the sixth round of Free Trade Agreement (FTA) negotiations.

I am delighted to be here in New Delhi, at the start of 2023, to underline the UK’s commitment to the 2030 Roadmap for deepening cooperation with India. Through our Comprehensive Strategic Partnership, the UK and India are together playing a key role in tackling the biggest challenges facing the world today, including food and energy security, economic recovery post-Covid and preventing future pandemics.

The UK and India are also increasingly working together multilaterally, including with the World Health Organisation and the international community on potential Malaria and Ebola vaccines. I was pleased to hear from Foreign Secretary Kwatra about India’s ambitious plans for its G20 Presidency. India is at the heart of the Indo-Pacific region, where half the world’s people live and 50% of global economic growth is produced. The UK is committed to working closely with India in making its Presidency a success.

During his visit to India, Sir Philip also met External Affairs Minister Dr. S Jaishankar, in addition to a range of UK partners in country.