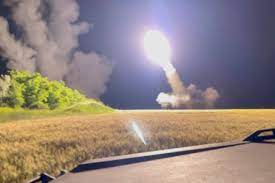 MOSCOW (Agencies): Russia has said that 63 of its troops were killed during a Ukrainian New Year’s Eve attack on a makeshift barracks in the partly-occupied Donetsk region. The ministry said in a statement on Monday that Ukraine’s military had launched six projectiles at the “provisional base” in the eastern city of Makiivka using the HIMARS guided rocket system supplied by the United States. Two of the missiles were shot down by Russian air defences, it added, but four struck the building.
The ministry’s statement came after the Strategic Communications Department of Ukraine’s armed forces said late on Sunday that 400 Russian troops were killed in the attack and another 300 were wounded. Footage posted online appeared to show a building purported to be a vocational college in Russian-controlled Makiivka reduced to smouldering rubble. Al Jazeera could not independently verify the footage or the numbers provided by either side. If Ukraine’s tally were confirmed, the toll would represent one of the single deadliest attacks on Russian forces since Moscow launched its invasion in late February.
Moscow-backed authorities in Donetsk also acknowledged casualties from the attack. Daniil Bezsonov, a senior Russia-backed official in the region, said the vocational college had been hit by HIMARS rockets a minute after midnight on Saturday.
“There were dead and wounded,” Bezsonov said late on Sunday in a post on the Telegram messaging app. “The exact number is still unknown. The building itself was badly damaged.” Igor Girkin, a former Federal Security Service officer who helped Russia annex the Black Sea peninsula of Crimea in 2014 and then organise pro-Russian separatist forces in eastern Ukraine, said on Monday that “the number of dead and wounded runs into many hundreds.”
Girkin, who has bitterly criticised Russia’s military failures in Ukraine, said ammunition had been stored in the same building where the recruits had been accommodated. “This is not the only such [extremely dense] deployment of personnel and equipment in the destruction zone of HIMARS missiles,” he said on Telegram.
The developments were reported against the backdrop of a recent wave of Russian bombardments of Ukrainian cities. Moscow has seen in the new year with nightly attacks on urban areas hundreds of kilometres from the war’s front lines, including Kyiv. After firing a barrage of missiles on Saturday, Russia launched dozens of Iranian-made Shahed attack drones on Sunday and Monday. Ukraine said on Monday that it had shot down all 39 drones in the latest wave of attacks, including 22 over the capital.
Ukrainian officials said the intensified bombardment was a sign of Russia’s desperation as Ukraine’s ability to defend its air space had improved with continued military support from its Western allies. “Now they are looking for routes and attempts to hit us somehow, but their terror tactics will not work,” President Volodymyr Zelenskyy’s chief of staff Andriy Yermak said on Telegram. “Our sky will turn into a shield.”
Zelenskyy on Sunday praised Ukrainians for showing gratitude to their troops and one another and said Russia’s efforts would prove useless. “Drones, missiles, everything else will not help them because we stand united,” Zelenskyy said. “They are united only by fear.” Russia says its attacks, which have knocked out heat and power to millions of Ukrainians in winter, aim to reduce Ukraine’s ability to fight. The Ukrainian government says the attacks have no military purpose and are war crimes intended to harm civilians.