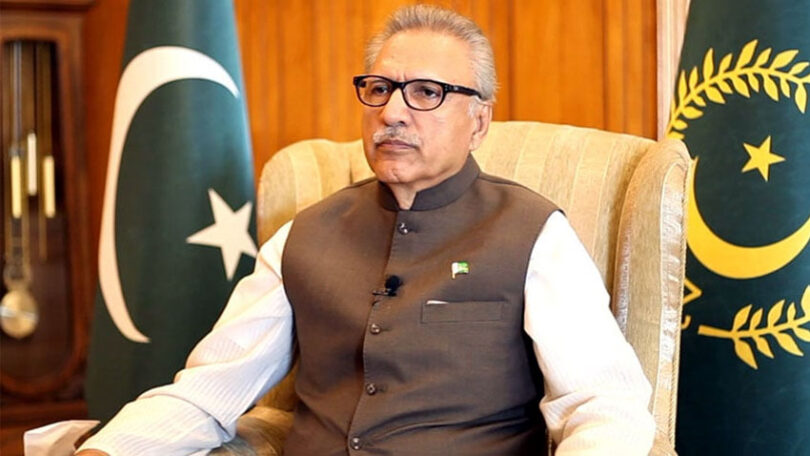 F.P. Report
ISLAMABAD: President Dr Arif Alvi has said the sacrifices rendered by the security personnel to purge the country of the menace of terrorism will not go in vain. He made the remarks during his telephonic conversation with the bereaved families of security personnel martyred in recent acts of terrorism in the country.
According to a Radio Pakistan’s report, the President paid glowing tributes to the valiance of martyrs and condoled with the bereaved families. Dr Arif Alvi was also appreciative of the spirit of the bereaved families who stated that they and their other sons and brothers are also ready to render lives for the sake of the country.
Meanwhile, President Dr Arif Alvi has urged the Overseas Pakistanis to highlight the human rights violations in Indian Illegally Occupied Jammu and Kashmir (IIOJK) and the persecution of minorities in India in their host countries.
Talking to a delegation of eminent UK and US-based Pakistani expatriates here in Islamabad on Monday, he said the issue of Indian Illegally Occupied Jammu and Kashmir is one of the oldest but unresolved agendas still waiting for implementation of several UN Security Council resolutions, which is unfortunate.
The President said the Overseas Pakistanis has a duty to highlight the atrocities being committed by the Indian Security Forces against the innocent Kashmiris to muffle their demand for the right to self-determination which was promised to them under various UN Security Council resolutions. He said images of the innocent Kashmiris brutalized by the heartless Indian Security Forces should be widely circulated in the international media to build pressure on India to resolve the long-outstanding dispute in accordance with the UN resolutions.
The President said religious extremism is on the rise in India and the majority Hindutva-inspired Hindu population is being pitched against all religious or ethnic minorities of the country. He said that minorities were being discriminated against, harassed, victimized, and intimidated across India on the basis of their religion.
He said minorities, especially Muslims, are even afraid to call their relatives elsewhere because of the fear of victimization by the Indian Security Forces. Arif Alvi said the overseas Pakistanis should maintain close and strong connections with the people of the areas of their origin and play their role to improve the country’s image.
The President termed the Pakistani diaspora around the world a great asset. He said the overseas Pakistanis should invest their knowledge, intellect and expertise to create enabling conditions in Pakistan to retain its precious educated and high-quality human resource which are direly needed for Pakistan’s socio-economic development. The President said although Pakistan is facing difficult economic and financial situation but they are surmountable.