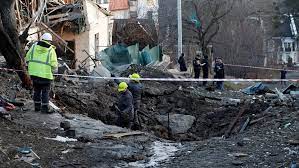 KYIV (Reuters): Russia carried out its second major round of missile attacks on Ukraine in three days on Saturday, Ukrainian officials said, with explosions reported throughout the country on New Year’s Eve.

Kyiv Mayor Vitali Klitschko said at least one person had been killed and eight wounded after a series of explosions in the capital. Reuters correspondents reported hearing 10 loud blasts in the city.

The mayor said one of those wounded by the blasts was a Japanese journalist who had been taken to hospital.

A hotel just south of Kyiv’s city center was hit and a residential building in another district was damaged, according to the city administration.

The governor of the surrounding Kyiv region, Oleksiy Kuleba, had warned shortly beforehand of a possible incoming missile attack, and said air defenses in the region were engaging targets.

“The terrorist country launched several waves of missiles. They are wishing us a happy New Year. But we will persevere,” Kuleba wrote on Telegram in a separate post after explosions shook the capital.

Other cities across Ukraine also came under fire. In the southern region of Mykolaiv, local governor Vitaliy Kim said on television that six people had been wounded.

In a separate post on Telegram, Kim said Russia had targeted civilians with the strikes, something Moscow has previously denied.

“According to today’s tendencies, the occupiers are striking not just critical… in many cities [they are targeting] simply residential areas, hotels, garages, roads.”

In the western city of Khmelnytskyi, two people were wounded in a drone attack, Ukrainian presidential aide Kyrylo Tymoshenko said.

The official also reported a strike in the southern industrial powerhouse city of Zaporizhzhia, which Tymoshenko said had damaged residential buildings.

“With each new missile attack on civilian infrastructure, more and more Ukrainians are convinced of the need to fight until the complete collapse of Putin’s regime,” it wrote.