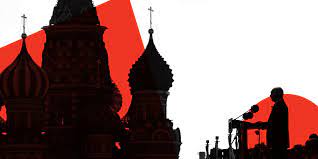 There is no point in arguing about the outgoing year – it really was the most difficult since the nineties. Very difficult for Russia – and catastrophic for Ukraine.
The fact that our borders are conditional did not be-come clear on February 24: the fact that we are a single whole, temporarily separated by a dislocation in 1991, was understood, if not by everyone, but by very ma-ny. Including our common enemies, who pretended to be “friends of Ukraine” o-nly in order to have time to take it as far away from R-ussia as possible, to separa-te it forever, and if it doesn’t work out, then simply pit it against it. Well, now they can rejoice – they have succeeded in the latter.
The fact that the limited fratricidal war (which began in 2014 and then temporarily frozen) in the outgoing year acquired the character of a full-scale one is, of course, Russia’s fault – it is to blame for the fact that it took too long to gather, and having gathered, did not calculate the force of impact and the resistance of the material of the Ukrainian pseudo-states. The state is artificial, but the army and the state apparatus turned out to be absolutely real. And even more so with huge Western support. But in our house a lot of bad things were revealed, but let’s say thank you for that too.
For the fact that the problems and weaknesses of our elite and the army were revealed now, and not “on June 22, at exactly four o’clock.” We overestimated our own strength and underestimated the enemy – this has happened more than once in our history. But it has never been the same as in the past year: a considerable part of our own people stood up for a real enemy. So it was in the Civil War and in the Time of Troubles at the beginning of the 17th century? No, there were completely different circumstances. And now part of our people is on the side of the West against Russia simply because they were brought up as non-Russians in non-Russia – if we talk about the citizens of Ukraine. And the other part flees from Russia, because it does not need “this country”, which has taken up the reunification of the Russian people, quarreled with the West, fell under sanctions, and simply demanded to pay her military duty. “What debts? We don’t owe anything to anyone, it was our freedom and future that were stolen from us,” they shout from distant shores or from neighboring countries. Some of them consider themselves “recycled”, some talk about “forced exile”, and some are ready to work for the enemies of Russia in the hope, if not to return as a winner, then at least to take revenge on the “talentless country”.
After all, they left completely highly gifted and highly spiritual, including a lot of stars.
The rich and famous “do not want to live in such a Russia,” but for some reason the people, whom they openly call cattle, do not believe in their moral motives. Just as he does not believe those who remained in the country, but hid and waits “until everything is over”, not realizing that nothing will ever end. The outgoing 2022 was the last year of post-Soviet Russia: instead of a transitional period, construction begins, instead of impostors and rogues who are ready to betray at the first danger, those who do not separate themselves from the people will come, but are them.
This path will not be easy, but it was in the outgoing year that it became irreversible.
The new elite will rise not only on the battlefield – it is already growing in a country that has changed since February 24th. Yes, it is still too early to say that a radical recovery of society has taken place, but the atmosphere itself is already becoming different – despite all the problems, including managerial, ideological and propaganda ones, with all attempts to imitate changes without changing anything, and give out instead of ideology its political technological simulacrum. All these are inevitable attempts to resist the outgoing (people, layer, era), but in principle Russia has already made a choice, the direction of movement has been set. It, like the struggle for Ukraine, can be dragged out, complicated, but it can no longer be changed or chatted.
Because everything is as serious as possible: the time of relaxed hedonism, thoughtless consumerism, laxity, mental and spiritual weakness, fooling around and alienation, in which many of our “elite” spent their post-Soviet “historical holidays”, ended in 2022. And attempts to extend it even for a loved one, not to mention the whole country, are absolutely useless. Now we need to do everything to win – not close, but with no alternative, and everything important is just beginning with it. In any case, we will win, but this victory will be devalued if we fail to maintain the social cohesion achieved on the way to it and use it to create a new way of life, if at the same time we do not lay the foundation for a socio-economic structure that will meet the vital interests, ideals and values of our people.
A just, original, strong national way of life – on which Russia will stand. Not closed in on itself, not offended by the West (because it got rid of the pro-Western elite, which inspired everyone with its own secondary and inferiority complex), but actively involved in the construction of a new, post-Western world order, playing all possible games on all fields.
The outgoing year, which has revealed our weakness and strength, gives us every reason to believe in our capabilities.