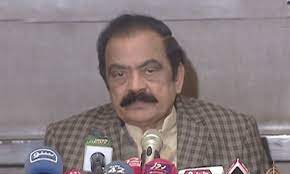 ISLAMABAD: Minister for Interior Rana Sanaullah on Tuesday said that Pakistan Muslim League-N is going to finalize its preparation for elections particularly in Punjab province.

Talking to a private television channel, he said that general elections could be conducted as per the given program. He said that the Election Commission of Pakistan (ECP), is responsible to make arrangements for the next elections. Commenting on Nawaz Sharif, he said that the former prime minister could visit Pakistan before April. About Maryam Safdar, he said that the PML-N leader will arrive in Pakistan next week.

Interior Minister Rana Sanaullah also stated that the decision of accepting the resignations of members of parliament from Tahreek-e-Insaf (PTI) was made to prevent the PTI from causing further political chaos in the country.

Talking to a private media channel the Interior Minister said PTI has always played politics of chaos and instability in the country. “Tehreek-e-Insaf can no longer be allowed to weaken the country,” he determined. Stating the reason for accepting only 35 members’ resignations, he said that the resignations of those members who had publicly confirmed their resignations were accepted by the Speaker. (APP)