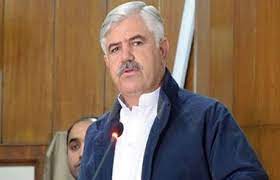 PESHAWAR: Khyber Pakhtunkhwa Chief Minister Mahmood Khan on Tuesday informed the provincial cabinet that a summary to dissolve provincial assembly would immediately moved to the Governor and also expressed gratitude to cabinet members, MPAs and bureaucracy for their support to his government.

Presiding over the 86th cabinet meeting here at the CM house, Mahmood Khan said that the four-year in power spent very good and he was grateful to people of KP for endorsing trust in him, adding that dissolution of assembly would not be delayed any further and the summary would be moved to the Governor immediately in vital nation interest. He hoped that PTI would come to power again with two third majority after winning the next general elections.

Khyber Pakhtunkhwa Cabinet in a meeting held here on Tuesday with Chief Minister Mahmood Khan in the chair approved upgradation of the posts of Secondary School Teachers (SST) and Primary School Teachers (PST) from BPS-16 to BPS-17 and from BPS-12 to BPS-14 respectively with effect from the next financial year. The upgradation of these posts, which was a long-standing demand of the teachers community, will benefit as many as 21,800 SSTs and 51,000 PSTs the province over.

Likewise, the posts of CT, DM, AT and PET have also been upgraded from BPS-15 to BPS-16 to fulfill their demand for upgraded scales. Similarly, a four-tier formula was also approved for the teachers to pave the way for promotion of 13,888 teachers working in various scales ranging from BPS-17 to BPS-20.

The chief minister while addressing the meeting said that he was grateful to all the cabinet members as well as the bureaucracy and masses for extending him all out support during his tenure as chief minister of the province. “It was the team work and best planning that ensured speedy development of the province”, he remarked. Upgradation of the teachers, he hoped, will enable the teachers to work with further commitment and devotion contributing towards promoting quality education in the province. He expressed the hope that PTI will emerge victorious in the next elections too by getting two third majority on the basis of its good performance and continue serving the masses selflessly.

Minister for Elementary & Secondary Education Shahram Khan Tarakai and Special Assistant to Chief Minister Khyber Pakhtunkhwa on Information & PRs Barrister Muhammad Ali Saif while briefing media persons about the decisions of the cabinet meeting at ITLA’A Cell informed that promotion of education sector was at the top of the PTI government’s priorities and the provincial government had taken various revolutionary steps in this regard which included the recruitment of thousands of teachers purely on merit, launching of double shift in schools, making the teaching of Quran compulsory as well as allocation of record funds for the education sector in the budget.
They further informed that the cabinet also approved one time cash grant of Rs. 5o million, and R.s 20 million for Peshawar Press Club and Swat Press Club respectively. Similarly, a grant of Rs 5 million was approved for the Nowshera Press Club, they further told. The cabinet , they said, also approved the establishment of District Committees on the Status of Women (DCSW) Khyber Pakhtunkhwa. The District Committees, which will be headed by a female chairperson and comprising of two elected female councilors as members besides others, will work for the wellbeing of the females as well as addressing their problems. The cabinet, they said, also approved policy on Urban Forestry in Khyber Pakhtunkhwa.

They further said that the cabinet also approved a grant of Rs 5 million as Annual Sustenance Fund for Umeed Special Education School during the FY 2022-23. They further informed that the cabinet also approved the transfer of 3 kanal land for the establishment of Rescue 1122 station at Mouza Kakki -1, Tehsil Kakki, District Bannu. The establishment of the station will contribute towards providing prompt relief to the people of this far flung area in Bannu during natural calamities and emergency situations.

The cabinet, they said, also approved the grant of age relaxation to as many as 77 Assistant Sub Inspectors (ASIs ) in Police Department, selected through Public Service Commission four years back. The provision of Rs 180 million as supplementary budget was also approved by the cabinet for bullet proofing of 20 number vehicles for 20 sensitive districts of the province, they further said. The cabinet, they said, also approved the Diseases Control Act 2022 and Khyber Pakhtunkhwa Animals Welfare Act 2022 to provide protection to the livestock from falling prey to diseases. Similarly the cabinet also approved annual budget of Rs. 19414 million of the Pakhtunkhwa Highways Authority for the construction of highways.