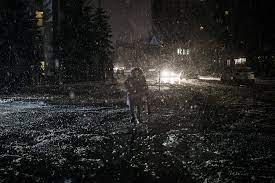 SARAJEVO, Bosnia-Herzegovina (AP) Vildana Mutevelic huddled in her apartment with her two young children and elderly cousins. They had no heat, electricity or running water as artillery shells tore the roof off their building and almost took their lives. To survive, she improvised.

Mutevelic made a lamp out of used engine oil, water and a shoelace for a wick. She cooked on a fire fueled by books, furniture, shoes or clothes. A plastic spoon, she discovered, when lit, worked well as a temporary flashlight if she ventured outside. Plastic sheets covered the blown-out windows, a flimsy buffer against the bitter cold. Her news of the world came from a neighbor who powered a radio with a car battery. “The electricity failed right away,” Mutevelic, 70, said through a translator. “And everything we had in our freezers, it melted. Those were our stocks, basically. That’s all.”

For Mutevelic, these are memories from three decades ago, when Bosnian Serbs besieged Sarajevo, causing thousands of civilian casualties. But it’s all happening again in Ukraine. Russia’s armed forces have aimed their firepower at Ukraine’s energy infrastructure as winter weather sets in. Ukraine President Volodymyr Zelenskyy, who has accused Russia of “energy terrorism,” said earlier this week that about 9 million people were without electricity. The country’s prosecutor general, Andriy Kostin, told The Associated Press that Russia’s deliberate targeting of Ukraine’s essential utilities is another act of genocide, the most heinous of war crimes.

“We are convinced that the crimes (Russia) is committing in Ukraine bear all the hallmarks of genocide,” Kostin said in a statement. “The aggressor state is ‘weaponizing winter,’ depriving Ukrainians of the basics electricity, water and heating.” To make civilians suffer and die as a way to force their government to yield isn’t a new wartime strategy. But it’s prone to failure. Families, neighbors and entire communities band together, brainstorm and resist. As Sarajevo did. And as Britain did when the island nation refused to buckle under Nazi Germany’s withering assaults 80 years ago.

“The ability of a modern population to survive under duress and under aggression because of the mere willingness to continue to exist is sometimes underestimated,” said Bruno Tertrais, adviser for geopolitics at the Institut Montaigne, a Paris-based think tank. Ukrainians are displaying the same resolve and ingenuity. Larysa Shevtsova’s apartment in Ukraine’s southern city of Kherson lost its electricity and water. But gas still flowed into a stove in the cramped kitchen. With two fire-resistant bricks and advice from a family friend, she and her husband were able to keep the temperature bearable in their home without being confined to the kitchen.

They’d set a brick directly on one of the stove’s four burners, the three others covered by large pots and a kettle. When the rectangular block was hot enough, it was carried carefully into the living room and set on top of a Soviet-era space heater that no longer worked. Shevtsova, her husband and two sons, one of them 3 years old, huddled around the brick for warmth that would last for about 30 minutes. “We use this method to heat the room,” Shevtsova said. “Before that we just froze.”

The Associated Press and the PBS series “Frontline,” drawing from a variety of sources, have independently documented more than 40 attacks by Russia on Ukraine’s electrical power, heat, water and telecommunications facilities since February. The extent of Russia’s path of destruction is not limited to one region of Ukraine. From the east to west, Russia has unleashed an onslaught of drone and missile attacks meant to inflict maximum damage to Ukraine’s energy infrastructure with a drastic uptick in strikes since September, according to AP’s analysis of the data.