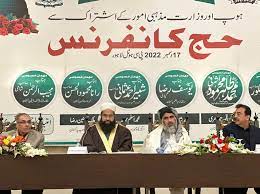 ISLAMABAD (APP): Prime Minister’s Special Representative for Interfaith Harmony and Middle East Hafiz Muhammad Tahir Mehmood Ashrafi said the Saudi government was facilitating the Hajj and Umrah pilgrims to the fullest extent possible.
In his remarks at a Hajj Conference organized by the Ministry of Religious Affairs and Interfaith Harmony and the Hajj Organizers Association of Pakistan (HOAP) the other day, he said the Saudi government, particularly Custodian of the Two Holy Mosques King Salman bin Abdulaziz and Saudi Crown Prince Muhammad bin Salman, were making all-out efforts to create more facilities for pilgrims and religious tourists.
Ashrafi, who is also the chairman of Pakistan Ulema Council (PUC), said as part of the preparations for Hajj pilgrims and other religious tourists, the government of Pakistan was in constant contact with the government of Saudi Arabia.
He said the pilgrims were expected to have more facilities this year, which was a welcome development, adding that the Saudi government made the best arrangements for Hajj last year.
He said, in collaboration with HOAP, the PUC would arrange a series of trainings for pilgrims across the country.
He said the Saudi government’s recent initiatives to facilitate the Umrah visa were appreciable and commendable. “Every Muslim values Saudi Arabia’s government and public services,” he maintained.
Ashrafi said the entire Islamic world was grateful to Saudi Arabia’s leadership for not suspending Hajj despite the Corona pandemic as it was a tremendous accomplishment on the part of the Saudi administration.
He said the nation was thankful to Prime Minister Muhammad Shehbaz Sharif and Religious Affairs Minister Mufti Abdul Shakoor for the pilgrims’ arrangements made last year.
He said the government would continue to assist Hajj organizers and any such initiatives that would benefit pilgrims and religious tourists.