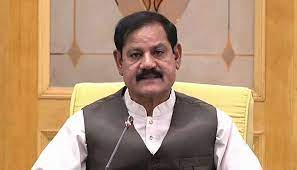 F.P. Report
PESHAWAR: Khyber Pakhtunkhwa (KP) Assembly’s Speaker Mushtaq Ahmed Ghani while responding to PTI’s chief decision over the fate of assemblies said that, the assembly would be dissolved on Friday as per Imran Khan’s call.
He said the country would default in case of delaying of elections and PTI would win the polls even if the Election Commission did not play fair. Talking about the current government he said: “The country is ruled by thieves and plunderers who are looting the country.”
Meanwhile, Speaker Khyber Pakhtunkhwa Assembly Mushtaq Ahmad Ghani on Sunday said the country was passing through testing times, and the only solution to save Pakistan is holding free, fair, and transparent elections.
He expressed these views while addressing the inauguration ceremony held in connection with the completion of the Astroturf and other related works at the Abbottabad Hockey Stadium. Mushtaq Ghani said that on the directives of Imran Khan the assemblies of Khyber Pakhtunkhwa and Punjab would be dissolved before the next Saturday, the people also want to get rid of these imported governments.
Ghani said that Khyber Pakhtunkhwa government started many mega projects in the province, especially in Abbottabad. Speaker KP assembly said that three Kanals of land have been acquired for the sports complex in Abbottabad, for which PC-I has been prepared. Similarly, he said, a sports complex was being built near the commissioner’s office for boys and girls. Another mega project was also being made in Dhodyal while efforts were being made to promote sports activities in the region, he added.