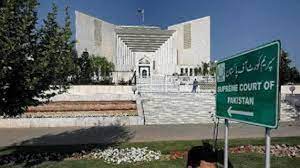 ISLAMABAD (Agencies): Chief Justice of Pakistan Justice Umar Ata Bandial has said that through media they have learnt that Pakistan Tehreek-e-Insaf (PTI) lawmakers intend to return to the Parliament.

Makhdoom said that if and when they (PTI MNAs) can go to the Parliament to get the grievance addressed, they may move a bill to amend or repeal the amendments. There is parliamentary procedure, they either can move the private bill to amend or repeal the law. Justice Bandial said that at this we need cooperation in every aspect, whether that is economic, police and social. Justice Ijaz ul Ahsan said that suppose there is bipartisan then they should consider amending the law. He added that the sanity must prevail on both sides. Everyone needs the best of the national interest.

Makhdoom said that the judicial approach is based on principle, while the political approach is based on generality. He further said that without politics there is no democracy and the country or the society survives with the spirit of accommodation. Then the counsel cited the Britain history, how the democracy flourished there. Justice Syed Mansoor Ali Shah stated that the parliamentary process is available to the PTI MNAs therefore go back and take up the matter in the National Assembly.

When the bench inquired from Imran Khan counsel whether he has any instruction from his client regarding the matter. Khawaja Haris said that the political situation is untenable and chaotic therefore nobody knows what will happen next. He said that not only the petitioner, but many other people also have suffered by the amendments. The Chief Justice said that dozen times my colleague (Justice Mansoor) stated that this matter to be decided in the Parliament and not in the court. However, the petitioner brought this case which attracts Article 184(3) of the Constitution.

Makhdoon contended that when the Supreme Court looks at strike down a statute then it should see the boundary of exercise of its power. Unless there is clear-cut unconstitutionality pointed out, the statute is not struck down mere on different of perception. He said the ethical issues need to be looked at with the perspective of constitutionality. Justice Ijaz observed that there are parliamentarians against whom there are serious allegations and some facing trial have introduced the amendments in the Assembly, which was passed into law. Due to this law the accountability courts, where cases were pending, took other way. The judge inquired from the counsel whether he had seen this in other countries.

Makhdoom replied no adding that there are many cases where the executive branch involved in corruption were given pardon, and clean chit was given to them. Justice Ijaz remarked that the pardon is different thing. He questioned does the counsel think the legislature can give clean chit or exonerate retrospectively. Justice Bandial said that they do not touch the amendments, but only say that the amendments are not retrospective then 90 per cent cases will go. But we are listening the case with patience. There is no requirement of the interpretation. He asked the counsel that the government should be open to review the amendments.

Makhdoom Ali Khan, representing the federation, said he would communicate the observations to the government, adding that the best thing is that the PTI MNAs contest these issues in the political forum. Makhdoom said that conflict of opinion has never been a ground to invalidate the legislation. There is no precedent that the court strikes down the law that x number of the parliamentarians benefited from the law. He argued that many parliamentarians have suffered because of the NAB law. The prime minister, finance minister and the chief executive of the country had been kept in jail and were not given bail for months, while a business man against whom there was evidence was acquitted without valid reason. No one challenged it even the NAB did not appeal against that order.

He said though laws for the accountability of the public-office holders have been since 1947, but it had been misused. No one has accused the prosecutors. The chief justice said why no one brought such cases in the apex court. Don’t leave everything to the Court. We don’t take suo moto notice on every issue. Justice Mansoor said that the PTI MNAs walked out of the Parliament, avoided debate in the parliament, undermining the Parliament and now approached the Supreme Court against the amendments. He questioned that should such case be heard by them by putting everything on hold?

Justice Ijaz said that if exercising Article 184(3) of the Constitution we hearing and when we find that Fundamental Rights are involved in this case then the locus standi of the petitioner is immaterial. Justice Mansoor said public importance becomes irrelevant when the fact before the Court is that the petitioner has undermined the parliamentary democracy. Later, the bench deferred the hearing of the petition till Wednesday (today) for further hearing.