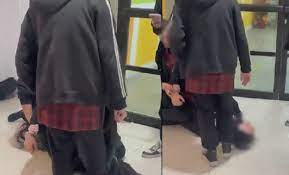 LAHORE: A sessions court on Saturday granted pre-arrest bail to the three schoolgirls involved in torturing their class fellow at a private school in Lahore.

Additional Sessions Judge Chaudhry Zafar Iqbal heard the bail plea filed by three of the suspects. Advocate Mian Rab Nawaz appeared on behalf of the three girls and told the court that the victim was a drug addict herself and wanted to engage his clients in the illegal act.

The lawyer argued that his clients were being implicated falsely and they were ready to cooperate with the authorities in the investigation. The video footage of the attack was uploaded on the social media, in which the three girls could been seen violently beating the victim.

According to the FIR, the complainant Imran (girl’s father) has said her daughter was beaten by her class fellows Jannat, Umaima and Noor Rehman. He said that, “The main suspect had offered my daughter a dose of a drug to inhale in the school, which she refused to do, and as a result, she was badly tortured”.

As per the FIR, boxer Umaima beat her violently and she even knifed her multiple times. It is claimed that the girl Jannat was drug addict and she wanted to drag the injured girl in drugs culture. (PPI)