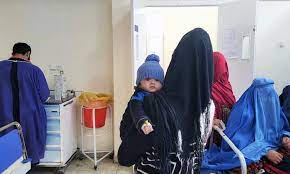 KABUL (Agencies): Afghanistan is witnessing a steep rise in pneumonia cases, with the disease having spread rapidly in children under the age of five last year as the country continues to weather a second winter under the Taliban rule.
Data shared exclusively by the International Committee of the Red Cross (ICRC) showed pneumonia cases in the country surged by 35 per cent in 2022, compared to the caseload just two years ago.
While a total 157,732 cases were reported in 2021 in the 33 hospitals supported by the ICRC in Afghanistan, this number increased to 213,049 last year.
The reported pneumonia cases in children under five almost doubled from 87,895 in 2021 to 135,056 last year, according to the international agency.
A near 16 per cent spike was reported in pneumonia cases among individuals over five years, with 80,993 cases last year compared to 69,837 cases in 2021.
Winter has also contributed to increased incidence and severity of respiratory infections, said the World Health Organisation (WHO).
The global health agency said it also observed a significant surge in cases of pertussis, also known as whooping cough, caused by the highly contagious Bordetella pertussis bacterium, and measles.
According to the WHO, a total 64 suspected pertussis cases were reported in November last year while at least 2,396 newly suspected measles cases, including seven associated deaths, were reported in the same time – a jump of 15.3 per cent from a month earlier.
The majority of the cases were reported in children under five years of age, as per the WHO.
Raising concerns about the challenges faced by patients in the country, ICRC says malnutrition is one of the reasons leading to an increase in respiratory diseases in children in Afghanistan.
“Child malnutrition cases are already 90 per cent higher this year compared to all of 2021, rising from 33,000 cases to over 63,000 so far this year,” explained ICRC’s Afghanistan-based spokesperson Lucien Christen.
“And it is widely known that malnutrition is a leading contributor to respiratory diseases,” he adds.
“Over the past few years, the country has observed a significant increase in malnutrition and this is directly related to economic turmoil in the country.
“People don’t have enough money, as a result, they don’t have enough means to buy food or clothes or wood to keep themselves warm,” he shares. “Even children are forced to work in the streets and turn into breadwinners for their families”
The humanitarian situation in the country “remains critical,” the WHO said.
“Despite the efforts of WHO, UN and other health partners, there are still more than 13 million people (about 32 per cent of Afghans) living in areas with no access to basic health services,” says Dr Luo Dapeng, the agency’s representative in Afghanistan.
“Twenty eight out of 70 major public hospitals are currently without funding,” he shares, adding that over 1,200 health facilities and more than 11,000 health workers are not covered through predictable support. “This includes 40 public hospitals used to provide Covid-19 treatment.”
The unprecedented level of malnutrition is especially worrying, Dr Dapeng said.
He warned that a combination of factors, including widespread malnutrition, measles, Covid, acute watery diarrhea and a struggling health system “will lead to an increase in preventable illness and death unless urgent action is taken”.
“Afghanistan has the highest number of people in emergency food insecurity in the world,” he says.
“One in two people do not know where their next meal is coming from, one in four pregnant women and one in two children are malnourished.”
“Malnutrition leaves people with weakened immunity, which makes them more vulnerable to illness and to severe complications and death from diseases like measles and other infectious diseases such as pneumonia – especially children.”
While he lauds the international community for help in preventing the collapse of the country’s health system, he says there is “much more” to support “availability, quality and affordability of services for all Afghans”.
The WHO needs up to “$350m to scale up the response to ongoing emergencies and emerging health needs”, including the expansion of coverage and bettering heath-service delivery, especially in underserved areas, as well as eradicating polio, he explained.