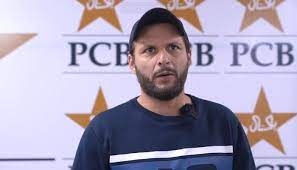 Talking to newsmen in Karachi on Saturday, Shahid Afridi spoke enthusiastically about his two teams proposal saying through it players’ workload will be managed. Afridi said he wanted to create two teams before he leaves this post, while laying focus on the communication gap among the players.

Responding to a question, Afridi said he thinks the chief selector should be in contact with every player directly. “I spoke to Fakhar Zaman and Haris Sohail personally, and learned that a clear picture about the players’s issues,” he remarked.

Shahid Afridi said “The major problem that I’ve observed here is the communication gap among the management, doctors and selection committee. It is important for a chief selector – be it me or someone else – to stay in direct contact with players.” However, Afridi made it clear that he is not running a one-man show and instead believes in consultations.

Afridi said that having experienced individuals like Haroon Rashid is helpful for him along with people like Abdul Razzaq and Rao Iftekhar Anjum who are involved in domestic cricket.

Afridi said that the wicket for second cricket Test against New Zealand in Multan will be a better one. “It will be something where bowlers will get some support and batters will also enjoy their stay, there will be some bounce on wicket,” Afridi said.

He further said “We cannot become a top team by playing on these dead wickets. The wickets on which we’ve been playing are injurious to our bowlers, pacers will start having fitness problems and spinners will get their fingers injured.” Afridi said “Who says we cannot produce better wickets in Pakistan. We certainly can if we are allowed to do so.”

Replying to a question, Afridi said he will try to do justice with all the performers as long as he is working as chief selector. He added if squad was of 25 players, he would’ve surely added Mohammad Huraira in the list of probables. He praised the youngster and said he has a good future ahead.

“One thing is that our academies are not working for last eight months, it is important that we keep them running for our domestic and under-19 performers. I will try to start a camp there for all such youngsters,” the chief selector added. He said Babar Azam is backbone of Pakistan team and selection committee is there to support him so that he can get more stronger in field. “I really his decision to give a target to New Zealand in the first Test,” he added.