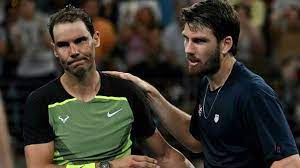 The 27-year-old had lost his four previous meetings with Nadal.

“He bet me easily the last few times, so it’s a great way to end the year for me,” said Norrie.

“I was thinking I’d never won a set before against him and I came out firstly wanting to do that.

“I had to stay super patient. It was a super physical match and I enjoyed it. It was huge to get through that one and finally beat him. It was a crazy match.”

Australian Open champion Nadal, 36, cruised through the first set, but Norrie broke Nadal’s serve in the sixth game of the second set and held his own to level the contest.

World number 14 Norrie broke early in the deciding set and saved two break points while leading 3-2 before serving out for victory. Nadal will attempt to defend his Australian Open title when the first Grand Slam of the year begins in Melbourne on 16 January.

“All credit to him that he did a lot of things very well,” said Nadal. “There’s a way to improve but I have time before the Australian Open starts in two weeks.” Swan, 23, also came from a set down as she beat Parrizas-Diaz 3-6 6-1 6-2.

It was a confident performance from the world number 145 Swan, who is ranked 75 places below the 31-year-old Parrizas-Diaz.
After a 3-0 victory over Australia in their opening group stage content, Britain need one win from their remaining three matches against Spain to reach the knockout stages.

World number 13 Paula Badosa will face Harriet Dart in the first match on Sunday before Dan Evans plays Pablo Carreno Busta, with the deciding mixed doubles to follow if required.

The inaugural mixed-team tournament involves six round-robin groups of three teams. Great Britain, Spain and Australia are competing for a chance to play the United States, Germany or the Czech Republic in a play-off to reach the semi-finals.