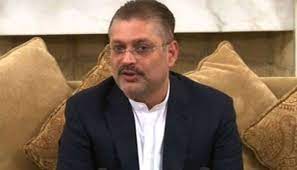 KARACHI:   Sindh Information, Transport & Mass Transit Minister Sharjeel Inam Memon has said  that Imran Khan has been given a shut-up call by his own Chief Minister and added that Chaudhry Pervez Elahi has reminded Imran Khan about its stature.

He said that Pervez Elahi is a wise politician, who has seen the opportunity and timely  played his cards . The minister expressed these views in a statement on Monday.

Sharjeel Inam Memon said that Pervaiz Elahi has demanded a guarantee from Imran Khan for 30 seats in the upcoming elections in Gujarat, Chakwal and other districts of Punjab.

He said that those who earned the title of the biggest dacoit of Punjab has fallen heavily on Imran Khan today. The minister said that  Imran Khan had taken the state as a cricket ground, where he wanted to make all decisions on his wishes.

He warned that the coalition government and the people of Pakistan will thwart every destabilization plans of Imran Khan and its party.He added that  date of dissolution of Punjab and Khyber Pakhtunkhwa assemblies was announced after performing witchcraft and black magic.

Imran Khan and PTI are trying to turn the country into sorcery ground and Mr. Niazi and his accomplices want to make decisions about the survival of the country and the nation through witchcraft and fortune-telling.