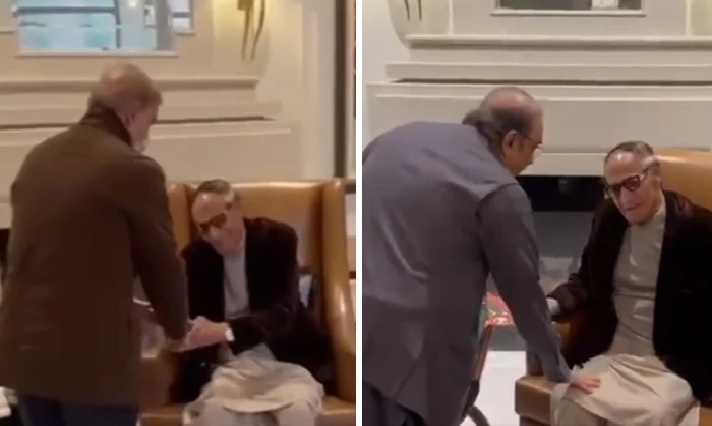 LAHORE (INP): Former president and Pakistan People’s Party (PPP) co-Chairman Asif Ali Zardari visited Prime Minister Shehbaz Sharif at his residence in Lahore and discussed country’s political situation and ‘possible’ dissolution of Punjab Assembly.
According to details, the former president called on PM Shehbaz Sharif at his residence in Lahore’s Zaman Park and discussed ‘possible’ dissolution of Punjab Assembly.
During the meeting, the prime minister apprised Asif Zardari of the former’s meeting with Pakistan Muslim League-Quaid (PML-Q) President Chaudhry Shujaat Hussain.
Meanwhile, sources said that PM Shehbaz Sharif and Asif Zardari agreed to increase cooperation with Chaudhry Shujaat. Both the leaders also agreed to task Chaudhry Shujaat for stopping dissolution of Punjab Assembly, sources added.
Sources claimed that the two leaders also decided not to approach Punjab Chief Minister Pervaiz Elahi directly till a ‘green signal’ from PML-Q president. They also decided to keep a close eye on the current political situation, sources added.
PM Shehbaz Sharif, Chaudhry Shujaat discuss political situation
Prime Minister Shehbaz Sharif called on Pakistan Muslim League-Quaid President Chaudhry Shujaat Hussain at his residence in Lahore and discussed country’s ‘political and economic situation’.
According to a statement, PM Shehbaz Sharif – during his meeting with the PML-Q President – enquired about his health and presented him with a bouquet of flowers.
During the meeting, the two leaders discussed the prevailing political and economic situation in the country. The prime minister apprised Chaudhry Shujaat of the measures taken by the government to restore economy and provide relief to the public.
The PML-Q president acknowledged the efforts of PM Shehbaz Sharif to rid the country and its people of the problems being faced. Moreover, Chaudhry Shujaat and the premier agreed to strengthen their mutual cooperation in the future.
Both the leaders agreed that political stability and close cooperation were essential to get the country out of the problems it is facing, the press release added.
The meeting came a day after Pakistan Tehreek-e-Insaf (PTI) Chairman Imran Khan announced that his governments in Punjab and Khyber Pakhtunkhwa will dissolve their assemblies on December 23 (Friday) to pave the way for fresh elections.