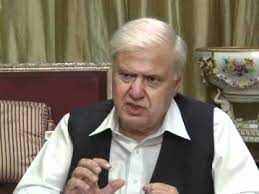 PESHAWAR: Qaumi Watan Party Chairman Aftab Ahmad Khan Sherpao on Wednesday asked the government and the opposition to set aside their differences and join hands to address the challenges facing the country.

He said this while addressing at a gathering to mark the death anniversary of those who were martyred in a suicide attack at his village mosque during Eid prayer in Sherpao village in Charsadda in 2007. Quran and Fateha khwani were held for the departed souls.
He paid glowing tributes to the martyrs and said their sacrifices would be remembered forever.

Aftab Sherpao said that the country particularly Khyber Pakhtunkhwa was once again experiencing a wave of terrorism and the law and order was deteriorating with each passing day.

He asked the government to review its Afghan policy and remove the shortcomings from its security policy.

Commenting on the Bannu Incident, he said the Pakistan Tehreek-e-Insaf government had failed to build the capability of the police and other law-enforcement agencies.

He urged the government to take steps to enhance the capability of the police and the law-enforcement agencies to tackle the issue of lawlessness and avoid the occurrence of the Bannu-like incidents.

He held the PTI government responsible for the Bannu incident, saying it did not build the capacity of the law enforcers and the police.
He said political instability and the poor law and order were affecting the economy, adding a strong economy guaranteed the country’s defense. (APP)