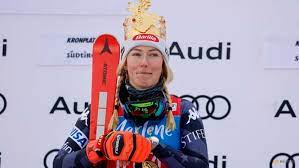 SAN VIGILIO DI MAREBBE (Agencies): Mikaela Shiffrin has become the most successful woman in World Cup skiing history with the 83rd victory of her career.

The giant slalom win in Italy takes her one clear of the record previously held by fellow American Lindsey Vonn. Shiffrin, 27, finished 0.45 seconds ahead of the field in Tuesday’s race.

“These days with two runs and everything, they are long days. They’re exhausting and at the end of it there’s too much excitement to feel.” Shiffrin won her first World Cup race in December 2012 aged just 17 and now has 51 victories in the slalom, 18 in the giant slalom, five in the super-G, three in the downhill and city events, five in the parallel slalom and one in the Alpine combined.

She opened a 0.13-second lead over the field in her first run in Kronplatz and stretched that further in the second to finish well ahead of Switzerland’s Lara Gut-Behrami and Federica Brignone of Italy. Shiffrin is top of the World Cup standings after her ninth win of the season with 1417 points, 556 points in front of Gut-Behrami. ‘Everyone knew it was going to happen’ Skiing great Vonn won the last of her titles in 2018 after dominating the sport for much of the 2000s and 2010s.

Shiffrin, who is the only person to have won a race in each of the World Cup’s six disciplines, has won 83 times in 238 races, while Vonn’s 82 wins came in 395 races. Shiffrin could have the chance to equal Stenmark’s record of 86 this weekend with another giant slalom race in Kronplatz on Wednesday and two races in her favoured slalom discipline at Spindleruv Mlyn in the Czech Republic on Sunday.

France’s Tessa Worley, who came fifth on Tuesday, called the four-time World Cup champion an “inspiration”. “I think everyone kind of knew that it was going to happen,” Worley said.

“What I like is that she’s doing it in the right manner, she goes on the race and wins the first run and goes to win the race.”